BELIEVE IT OR NT: COMPANY TO MAKE MILLIONS FROM ECO-NUTSIES DUMPING IRON INTO THE MIDDLE OF THE OCEAN! 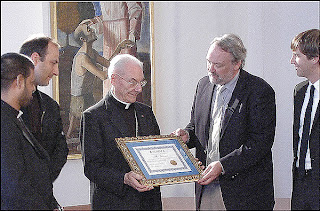 A small California company is planning to mix up to 80 tons of iron particles into the Pacific Ocean 350 miles west of the Galapagos islands to see whether it can make a splash in the markets where people seek to offset their greenhouse gas emissions.

Planktos -- with 24 employees, a Web site and virtually no revenue -- has raised money to send a 115-foot boat called the Weatherbird II on a voyage to stimulate the growth of plankton that could boost the ocean's ability to absorb carbon dioxide from the air. The company plans to estimate the amount of carbon dioxide captured and sell it on the nascent carbon-trading markets.

... In a bid for attention for another of its projects, Planktos said earlier this month it would offset the Vatican's carbon emissions by donating credits from trees being planted in a Hungarian national forest.

The company said it would make the Holy See "the world's first carbon-neutral sovereign state." It released a video that panned across St. Peter's Square to music from Johann Sebastian Bach's "St. Matthew Passion" and then cut to Cardinal Paul Poupard, who thanked Planktos chief executive Russ George.

... if the company started selling large amounts of ocean-based carbon credits, it could flood the market, reducing incentives for more reliable and measurable projects aimed at reducing greenhouse gases in the atmosphere.

"The global market for voluntary carbon offsets is currently unregulated," said Derik Broekhoff, senior associate at the World Resources Institute, "which has led to growing concerns about whether buyers are really getting what they are paying for."

THE WHOLE DAMN THING - AGW AND CARBON CAPS ANDS CARBON CREDITS - IS A SCAM OF A HOAX OF A SHAM AND A FRAUD.
Posted by Reliapundit at 11:35 PM