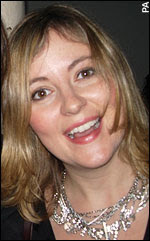 A high-flying television producer died from a suspected epileptic fit while waiting for vital brain scans on the NHS.

Laura Price, 30, who worked on shows such as Big Brother and Strictly Come Dancing, was found dead in her home just hours after she had been discharged from casualty.

The evening before she died, Miss Price, from Notting Hill, west London, had begged a junior A&E doctor for anti-seizure drugs but had been told they could only be prescribed by a neurologist.

Two days earlier she had visited a specialist at Charing Cross hospital and was told she would have to wait six weeks for a brain scan. She had felt "concerned and afraid" at having to wait that length of time for a test before being treated for a recurrence of childhood epilepsy, Westminster coroner's court heard.

IF SHE LIVED IN THE USA - AND EVEN IF SHE HAD NO HEALTH INSURANCE - SHE'D BE ALIVE.

IF SOCIALIZED DOESN'T WORK WELL IN THE UK, THEN WE SHOULDN'T TRY IT HERE - DESPITE WHAT THE SELF-AVOWED SOCIALIST PROPAGANDIST MICHAEL MOORE SAYS.

DON'T LET THE DEMOCRATS DEMAGOGUE YOU - OR ANYONE YOU KNOW - ON THIS ISSUE.

Posted by Reliapundit at 9:59 PM