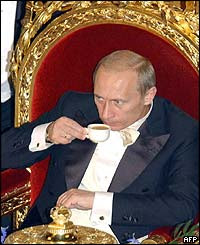 Russia has the world's largest gas reserves. It is the second largest exporter of oil after Saudi Arabia. The Kremlin is keen to secure Russia's long-term hegemony over global energy markets, and to find new sources of fuel.

But the latest scientific findings are likely to prompt Russia to lodge another confident bid - and will alarm the US, which is mired in a 13-year debate over ratification of a UN treaty governing international maritime rights.

... On Monday ... a group of Russian geologists returned from a six-week voyage on a nuclear icebreaker. They had travelled to the Lomonosov ridge, an underwater shelf in Russia's remote and inhospitable eastern Arctic Ocean.

According to Russia's media, the geologists returned with the "sensational news" that the Lomonosov ridge was linked to Russian Federation territory, boosting Russia's claim over the oil-and-gas rich triangle. The territory contained 10bn tonnes of gas and oil deposits, the scientists said.

PUTIN IS A BAD MAN: HE ASSASSINATES HIS OPPONENTS AND ARMS AND BUILDS NUCLEAR REACTORS FOR OUR ENEMIES - AND USES ENERGY AS A WEAPON.
HE'S A THREAT TO WORLD PEACE. IT'S TIME SOMETHING SERIOUS WAS DONE ABOUT HIM.
Posted by Reliapundit at 9:32 PM