BANNED BY PBS: MUSLIMS AGAINST JIHAD 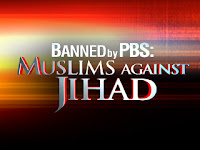 PBS refused to air a documentary entitled, Muslims Against Jihad so Fox News picked it up. It will air tonight on the FNC at 9:00 pm ET. It will be repeated at 3 am the next morning. It is hosted by E.D. Hill. Here is a brief description of it by Fox News:

Tune in this weekend, as FOX News Channel presents the documentary the Public Broadcasting System didn't want you to see.

It was commissioned as part of the PBS series "America at the Crossroads" about the post 9/11 world, but PBS executives rejected it.

PBS claims the filmmakers were "alarmist, overreaching and unfair."

The filmmakers say they were censored because of liberal bias at PBS.

On a topic this important, we think you have the right to decide for yourself.

To watch a clip of it, and an interview with producer Martyn Burke, go here. Frank Gaffney, another producer of the documentary was on Hannity and Colmes last night, also talking about the show.
Posted by Dionne at 12:59 AM

I could be wrong, and I probably am, but I thought I read on another blog that PBS is actually airing it, as well... but again, don't quote me.And I don't remember whose blog.