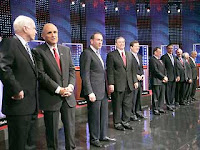 Best line of the night--Rudy
"That's really an extraordinary statement, as someone who lived through the attack of Sept. 11, that we invited the attack because we were attacking Iraq. I don't think I have ever heard that before and I have heard some pretty absurd explanations for Sept. 11. I would ask the congressman to withdraw that comment and tell us that he didn't really mean that."

High Five line--Mitt Romney
"My fear is that McCain-Kennedy would do to immigration what McCain-Feingold has done to campaign finance and money in politics -- and that's bad."

Best immigration line--Duncan Hunter
"We need to be able to ask people when they want to come into America: Knock on the front door because the back door's going to be closed."

Best explanation on the sanctity of human life--Mike Huckabee

To see what grades I gave everyone, go here!!
Posted by Dionne at 2:25 AM

Great blogging job here. I did a blog post on the debate as well.

You grade tougher than I do, BUT..

I've officially called for Tommy (is this guy drunk?) Thompson, Sam Brownback and Tom (road to damascus) Tancreado, and Ron (why am i here) Paul to drop out.


Hunter, Gilmour and Hucklebee did enough to stay in the race.

Big winner was FoxNews for the format and questions.

Artful Sub:
Thanks!! I did grade tough but its because some of these guys are pretty un-impressive. My only regret is that I should've graded Duncan Hunter a little higher.

I'm with ya on Tommy, Sam, Tom & Ron dropping out. They don't add anything to the debate but nausea. I would also add Gilmore too though.

Hunter and Huckabee did do enough to stay in and thats without me being much of a Huckabee fan.

I'll check out your take on the debate too.