THE PRESIDENT AND FIRST LADY OF FRANCE GET RAVE REVIEWS 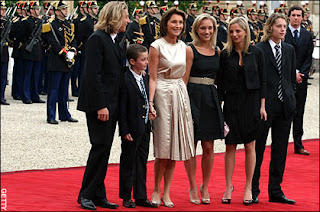 It is rare, if unheard of, for a president of France to be upstaged at his own inauguration. But when former model Cécilia Sarkozy swept up the red-carpeted steps of the Elysée palace yesterday, France's new First Lady stole the show from husband Nicolas.

Mrs Sarkozy looked more like a star arriving the Cannes film festival than the matronly presidential consorts France is accustomed to. Camera shutters whirred as the 49-year old, holding the hand of their ten-year-old son Louis, brought Jackie Kennedy glamour to proceedings in an ivory duchess satin Prada dress.