FIRST THEY CAME FOR THE PUPPIES 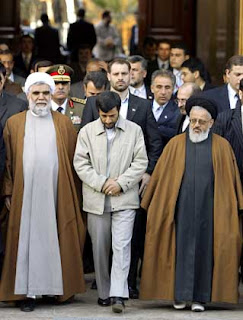 IN THE ISLAMIC TOTALITARIAN STATE OF IRAN, THEY'RE ARRESTING MORE THAN JUST MEN WITH OUTLANDISH HAIRSTYLES, AND WOMEN IN PRINTED HIJABS - THEY'RE GOING AFTER PEOPLE WITH DOGS AS PETS.

IN FACT THEY CAME FOR THE PUPPIES FIRST.

Yeah, it sounds INSANE, and insanely repressive. I mean Hitler never did this. Or Stalin. But it's true.
AND THIS IS NOT SOME NEW CRACKDOWN; IT BEGAN YEARS AGO; THEY'RE JUST CRANKING IT UP A NOTCH.
4/20/06 - UK GUARDIAN: 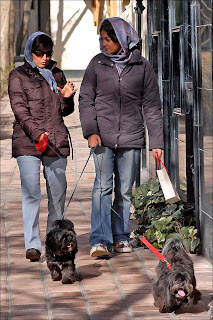 Officers will also be authorised to confront ... people walking pet dogs, an activity long denounced as un-Islamic by the religious rulers.

A conservative Iranian cleric has denounced the "moral depravity" of owning a dog, and called for the arrest of all dogs and their owners.
Dogs are considered unclean in Islamic law and the spread of dog ownership in Westernised secular circles in Iran is frowned upon by the religious establishment.

"I demand the judiciary arrest all dogs with long, medium or short legs - together with their long-legged owners," Hojatolislam Hassani is quoted as saying in the reformist Etemad newspaper.

THIS ARTICLE IS FROM 9/02/01 - JUST OVER A WEEK BEFORE THE ISLAMO-TERRORISTS ATTACKED US HERE - SFGATE/NYTIMES:

Periodically, the guardians of all things revolutionary and Islamic in Iran decide that the country's pet dogs must go.

"I would like to thank the honorable police and judges and all those who worked to arrest dog lovers and to confiscate short-legged dogs in this city," thundered Gholamreza Hassani, a mid-ranking cleric, in a recent Friday prayer sermon in the northeastern city of Urmiyeh.

The dead from the war against Iraq should consider themselves blessed, he intoned, because they did not live to behold such an affront to Islamic values.

"Happy are those who became martyrs and did not witness the playing with dogs! Now, in our society, women wear hats and men hold dogs," he said.

Although Hassani is known for occasionally eccentric topics, there is no mistaking the campaign against dogs this year. Dog owners say confiscations have been up sharply for months, and special television programs roll out experts to discuss diseases spread by dogs. In a general crackdown announced last week against what they termed moral depravity, the police said dog sellers would be arrested along with women wearing heavy makeup and storeowners displaying provocative mannequins.

The dubious view of dogs is traced, of course, to Islamic teaching. There is just one vague reference in the Koran to a tribe owning dogs. However, the Hadith, the sayings of the prophet's contemporaries that is the basis for much Islamic law, contains about 430 references to dogs. ...

"Angels do not enter a house that has either a dog or a picture in it," reads one. Another says, "Whoever keeps a dog except for hunting, guarding cattle and crops will lose one large measure of his reward every day."

Should even a sanctioned guard dog lick a piece of household china, there is real labor involved in restoring its cleanliness.

"When the dog licks the utensil, wash it seven times and rub it with earth the eighth time," advises one Hadith.

In the Shiite branch of Islam prevalent in Iran, learned scholars write lengthy tomes about customs and practices that the faithful turn to for advice. The chapter on daily living inevitably censures dogs.

The Islamic Propaganda Office in Qom, the center for religious studies in Iran, publishes an abridged compilation of the teachings called "Everything You Need to Know." The 10 things listed as unclean and best avoided include beer, wine, infidels and dogs.

I LIKE BEER, WINE, NAKED INFIDEL WOMEN, AND DOGS.
I HATE ISLAMISTS.

LET'S DESTROY THEM. AND SAVE THE PUPPIES. 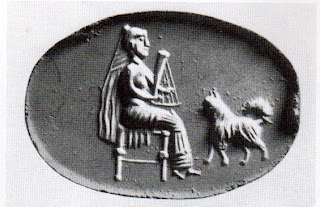 BTW: The people of Iran - THE PERSIANS - LOVE DOGS! The pic' to the left is of an ancient depiction of a Persian woman playing music FOR her Maltese puppy!

And remember, they do NOT speak "Iranian" over there; they speak PERSIAN. They're culture is NOT Shia, it is Persian.

The islamo-fascists are attempting to destroy Persian culture.

I hope the Persians RISE UP, and overthrow these horrifying tyrants.

For the puppies!
Posted by Reliapundit at 7:03 PM