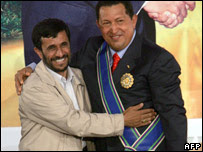 Venezuelan President Hugo Chavez demanded Pope Benedict apologize to Indians in Latin America for saying this month in Brazil that the Roman Catholic Church purified them.

Chavez, who regularly clashes with the Catholic Church in Venezuela but had not directly criticized the Pope before, accused the Pontiff on Friday of ignoring the "holocaust" that followed Christopher Columbus's 1492 landing in the Americas.

"With all due respect your Holiness, apologize because there was a real genocide here and, if we were to deny it, we would be denying our very selves," Chavez said at an event on freedom of expression.

In a speech to Latin American and Caribbean bishops at the end of a visit to Venezuela's neighbor Brazil, the Pope said the Church had not imposed itself on the indigenous peoples of the Americas.

Indian leaders in the region were outraged by the comments.

Millions of tribal Indians are believed to have died as a result of European colonization backed by the Church, through slaughter, disease or enslavement.

TRUTH: The indigenous cultures of this hemisphere were among the most brutal, bloodthirsty and barbaric in all of human history on any continent. Christianity SAVED them from the horrifying brutality of their INDIGENOUS "CULTURE" and indigenous and internecine wars, human sacrifice and cannibalism. Perhaps some had Christianity imposed on them, and certainly they did have Western Civilization imposed on them. this was NET GAIN for them.

The story that the Conquistadors and the Church took over via racist genocidal warfare is ABSOLUTELY wrong and a LIE the Left has told and retold over and over - in almost all our academic settings - in order to promote the idea that the Judeo-Christian West is bad and Marxism good.

The Roman Catholic Church in particular saw EACH AND EVERY indigenous person as a full human with a full soul worthy of membership in the Apostolic Church. There were NOT churches for Europeans and others for indigenous people, there was one church for ALL. This is far FAR far FAR more humanistic and open than ANY and ALL cultures of the New World were.

Mayan and Aztec and Incan history is REPLETE with horrifying accounts of brutality which makes al Qaeda look tame. Many of the principalities of these "cultures" practiced human sacrifice WITH CANNIBALISM on a huge scale. For the dedication of Tenochtitlan, the Aztecs may have ritually MURDERED tens of THOISUANDS of people and then cannibalized their remains.

This is worse than ANY AND ALL actions of the Church or the West aganist the indigenous cultures.

REPEAT: WE SAVED THEM!

REMINDER: Nobody from Mexico -- or any other nation in the New World - is "escaping" the West and sneaking into more naivistic/indigenous regions; THEY ARE ALL HEADING HERE. Just as Haitians head here and NOT CUBA.

If the Church and the West were so so so evil and bad, then they'd be leaving. In fact, the Pope's biggest problem in the region is the growth of Pentecostalism, and not drift back to nativism.

And the MSM and the Academy sits idly by - because they are dominated by Leftist and have been brainwashed to believe these lies.

Modern Leftism DEPENDS on this basic lie - because Marxism predicted that the MOST INDUSTRIALIZED ECONOMIES would become communist first, and this never ever happened. So as Lee Harris has proven, the Left morphed and reinvented itself as a defender of the Third World. Hence their HATRED of globalization and industrialization - to things Marx himself thought were good.

And which human lifespans and living standards in the West PROVE ARE GOOD.

To improve the lives of BILLIONS of people in the Third World, they need MORE WESTERNIZATION, not less.

NOTE: READ THIS LEE HARRIS ESSAY TO FULLY GRASP THE WESTERNPHOBIA OF THE POSTMODERN LEFT.

ALSO NOTE: The fact that Hugo Chavez - SOCIALIST - attacks the Pope and EMBRACES Ahmadinejad is no accident; it reveals the core truth about postmodern leftism: it hates the West and will ally itself with jihadism to achieve this.
Posted by Reliapundit at 9:02 AM