BILL RICHARDSON: THE ONLY SERIOUS DEMOCRAT CANDIDATE FOR PRESIDENT 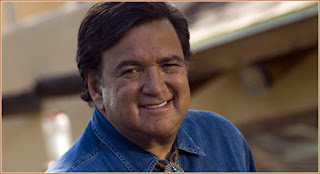 If I had to break bread with one of the Democrats running for president, it would be Bill Richardson.

He has a stellar resume full of domestic and international experience. He's no conservative, but he's more moderate than he is liberal for the most-part.

I not saying that I would vote for him or that he's "all that," (Giuliani/Thompson '08!) but he's at least a Democrat that one could sit and have an intelligent discussion about the issues that matter most: terrorism, immigration, taxes, etc.

Richardson has produced a couple of campaign ads - [LINKED TO BELOW BY RELIAPUNDIT - WHO ALSO CALLS RICHRDSON THE ONLY QUALIFIED DEM IN THE RACE] - in which he is in a "job interview" for president. They're really good ads and he comes across really well.

What's going to be interesting (and a real measuring stick for just have far over the edge the Democrat Party has gone) is how well Richardson does in the Democratic primaries.

Obviously, he's not going to get the money or press that Hillary and Obama get, but should he get respectable numbers it would be a glimmer of hope for party. However, I very much doubt he'll ever get beyond single digits.

This party that once housed giants like FDR, Truman and JFK has become something those three men would scarcely recognize today. In a political party that is determined to see America on its knees, Richardson is as rare as a sober Irishman. (I'm part Irish, I can say that, so don't bother emailing me).

RELIAPUNDIT ADDS: I AGREE THAT HIS RESUME IS VERY IMPRESSIVE. HOWEVER, HIS IRAQ PLAN SUCKS BIGTIME. HE IS NO HAWK. AND IN WARTIME, WE NEED HAWKS CALLING THE SHOTS, NOT DOVES AND APPEASERS.
Posted by Jim Rose at 10:29 PM

Great minds think alike! I agree, his war plans are terrible, and that just shows you how bad the Democrat Party is when he's the best of the bunch.