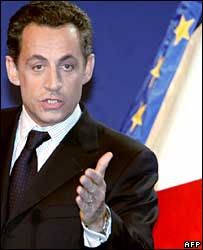 The poll by CSA-CISCO shows right-wing candidate Sarkozy with 26.5 per cent and Socialist Segolene Royal in second with 25.5 per cent. The two frontrunners each lost half a point compared to the last poll. Le Pen clocked in at 16.5 per cent to overtake centrist candidate Francois Bayrou in first round intentions to vote. Bayrou lost one point to fall to 16 per cent.

Mr Le Pen is currently polling between 13 and 16 per cent, more than he was at the same period in 2002. Analysts warn that it is difficult to establish accurate voting intentions for the 78 year-old leader of the xenophobic far right because of his supporters' reluctance to admit their allegiance.

HERE'S WHY I FEEL SARKOZY WILL WIN, AND WHY I AM HOPEFUL FRANCE MAY SURVIVE: GUARDIAN:

Nicolas Sarkozy, the rightwing frontrunner in France's first-round presidential vote, has spent weeks stressing that he has mellowed. But at his final campaign rally in front of 20,000 people in Marseille, the former interior minister who once suggested wayward suburban youths were scum, sent a clear message: "I'm still myself."

Reclaiming the passion he had recently toned down, he dripped with sweat as he promised to be France's "protector" and restore faith in a country crippled by unemployment, economic stagnation and self-doubt.

"I hate this fashion for repentance that says France hates itself and its history," he roared. He said colonisation might have been an "unfair system" but would not apologise for it and talked of the debt owed to those "decent and hardworking French families" forced out of Africa. Boasting no fear of the "politically correct" lobby, he proudly repeated his codewords for a new moral and patriotic France. "Authority! Authority! Authority!" he shouted to wild cheers. He joked about critics' fears of a "police state", saying he would not back down on firm policing. The crowd went wild.

... For the awe-struck crowd at Marseille and millions across France, he is the only figure strong enough to restore French pride and kickstart the flagging economy by embracing liberalism with a more flexible labour market and lower tax. He promises to lock up young offenders, control immigration, rid the streets of crime and stop factories being moved from France to the lower-cost developing world. To his critics on the left, he is a divisive demagogue, a racist authoritarian, highly strung and driven by personal ambition.

Regardless of their political viewpoint, the majority of French people think he will win the second-round runoff on May 6 to become president of France.

IF SARKO IS DOING THIS WELL WITH HIS RIGHT-OF-CENTER RHETORIC IN THE ETHNICALLY MIXED MARSEILLE, THEN HE WILL DO EXTREMELY WELL IN THE NATION AS A WHOLE.

PERHAPS HE WILL DO BETTER IN THE FRST ROUND THAN THE POLLS SHOW - AND LE PEN WORSE.

The candidates will effectively weigh in, as repeatedly predicted, in this order: Nicolas Sarkozy (UMP), Ségolène Royal (Socialist), François Bayrou (UDF), Jean-Marie Le Pen (Front National). The “small candidates” –Philippe de Villiers and Frédéric Nihous on the Right, Olivier Besancenot, José Bové, Marie-George Buffet, Arlette Laguiller, Gérard Schivardi Dominique Voynet on the Far Left will all be confined to the bull pen with low scores, 1 – 2 %, except for Besancenot who will probably reap 5%.

There will be no big surprises for Le Pen or Bayrou. Sarkozy’s lead over Royal should be in the upper rather than lower range …perhaps 5 points.

I DISAGREE. I THINK LE PEN WILL DO VERY WELL, AND FINISH IN SECOND. WHY?! LE PEN'S POLLING BETTER THIS TIME THAN LAST TIME, AND I THINK MORE OF BAYROU'S SUPPORT COMES FROM ROYAL, THAN SARKO'S COMES FROM LE PEN. HERE'RE MY NUMBERS:
Je prie.
Posted by Reliapundit at 8:26 PM

France getting ready to show some gumption? The situations we're not hearing about in the msm are bringing France to their senses as to what's at stake.

maybe.... maybe the french people are AT LEAST as fed up as the danish.

i think they are - which means sarko and le pen have to garner more than 50% of the electorate.

if the additional 8% is split between them then sarko gets 31% and le pen 20 - enough to get into the second round - and be trounced again.

I THINK THAT THE DHIMMIS CONSTITUTE ABOUT 48% OF THE FRENCH ELECTORATE.

AND THIS IS SPLIT BETWEEN ROYAL, BAYROU AND THOSE TO HER LEFT. THE EXTREMISTS GET ABOUT 15%.