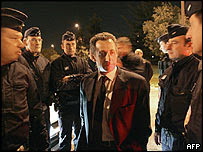 I think the islamo-thugs of the Parisian banlieue's (Muslim ghettos) are trying to do to Sarkozy - with riots/intifadas - what the islamo-terrorists did to Aznar's successor in Spain with the Atocha train bombings in Madrid.

Which means there'll be a lot more of thisbetween now and the election:

Officials said about 100 people were involved in the melee at Gare du Nord, one of Paris' most important transport hubs. Officers and police dogs fired tear gas and charged at groups of marauding youths, some of them wearing hoods and swinging metal bars.

The youths responded by throwing trash cans and other objects at the officers. A group of youths smashed the windows of a sporting goods store and looted boxes of shoes. Others attacked automatic drink dispensers and set fire to an information booth.

Dozens of rioters attacked windows, vending machines and shops in the main hall of the subway station in the afternoon, and it took police until nearly midnight to clear the station of rioters.

The trouble started when a 33-year-old without a ticket jumped the barriers in the subway station and was stopped by railway officials, police said. He tried to resist and is accused of injuring two officials. Police patrolling the station intervened and arrested him.

However, several young people who witnessed the incident began to gather in protest against what they perceived to be the use of excessive force by police. The passenger was removed from the station but the crowd grew.

Some began throwing plastic bottles at police and shouted insults at Nicolas Sarkozy, the former interior minister and centre-right candidate for president. They also chanted slogans of "police are everywhere, justice is nowhere" and "down with the state, police and bosses".

Police reinforcements soon arrived, but did not dislodge the rioters from the station until tear-gassing them shortly before midnight. The youths then played a game of cat and mouse with police in nearby streets, setting trash cans and signs on fire. Calm was restored only one hour later.

In autumn 2005, youths and police clashed every night for three weeks in France's worst riots for decades.

Sarkozy, who left the government on Monday to campaign full-time for the presidency, was accused of provoking the rioters by calling them "scum."

THE ISLAMO-SCUM WANT SARKOZY TO LOSE BECAUSE HE IS THEIR TOUGHEST FOE. (SARKO IS BLUNT ABOUT PROTECTING FRANCE, FRENCH CULTURE - AND THE EU: HE HAS EVEN ADAMANTLY OPPOSED TURKEY'S ADMISSION TO THE EU.)

This is a significant escalation in the Francifada. The Gare du Nord is a major transportation hub in the capital, and is one of the stations to which trains go from the airport, for example. This "insurgency" is no longer limited to the suburbs, it is right in the heart of Paris.

I also suspected that there was some low-level "electioneering" by some random socialist biped going on here as well - some typical bundle of anger who thought to himself "let's see what Sarko does about THIS!"