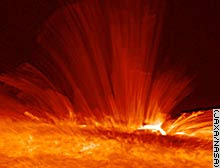 "These images will open a new era of study on some of the sun's processes that affect Earth, astronauts, orbiting satellites and the solar system."

The scientists said they were surprised and delighted by the findings.

"It's going to put us in a whole new realm of understanding," Golub told a news conference.

"Everything we thought we knew about X-ray images of the sun is out of date."

Scientists still do not fully understand the Sun - or its effect on Earth's climate. More and more there is evidence that space is not an empty vacuum in which our atmosphere sits - but filled with energy which effects our weather and climate MORE THAN MAN-MADE CO2.
Posted by Reliapundit at 8:47 AM