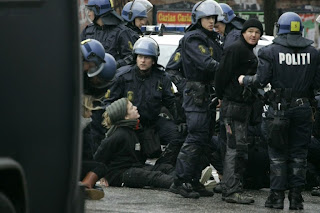 Well - actually the riots have already begun - and the streets are once again littered with cobblestones. Todays events started early this morning when the Police exercised a court order from December 2006 to empty the Youth House so the new owners could take possession of their property. At approximately 7 AM a helicopter dropped 10 policemen on the roof of the building. This was necessary to prevent the occupiers of the building from throwing stones and molotov cocktails on the street below. The police also used a crane to break barricades and place containers up against Jagtvej 69 - which could function as protected pathways to enter the building. Initial reports say the 4 anarchists in the building we literally caught in bed. The police entered the building and foamed the interior - and removed the occupiers - including one German citizen who is now in hospital with a head injury. Intitial reports were that 10 - 15 "activists" were arrested (this includes arrests on the outside the building). The occupiers of the Youth House promised a battle - and it seems they have taken it to the streets. And they promise it will be violent - i.e. there will be a price to pay.

While initial reports were that only 4 activists were in the building it appears that the police are removing groups of 12- presumably under arrest- out the back door to waitng paddy wagons.

IMHO the behaviour of these anarchists forfeits their right to a special Youth House - which is sad because there are a lot of good reasons to create a space for young people to be responsible...

Background: The Youth House was given to the activists by the Socialist-controlled Copenhagen City, and it was later sold by the Socialist-controlled Copenhagen City to a religious group. That sale was challenged by the occupiers of the Youth House. The youth activists lost - also on appeal. A Fund offered about 2 million dollars to the activists to purchase another location - the activists demurred. The Mayor of Copenhagen, Ritt Bjergaard, came with a whole series of unrealistic offers (some illegal, others without authority) which saved the face of the Socialist Party but which also did not lead to a resolution of the conflict. ( just be thankful Ritt doesn't know where you live - she might have offered them your house!)
Stay Tuned!

Posted by northern seer at 4:04 AM

We are the best of the best in condos with a beautiful to the sea and we have the best service.
Great investment opportunity at Costa Rica Pacific Coast, Preconstruction condos in costa rica ,
Condo sales in costa rica, Retirement property in costa rica. Visit us for more info at: http://www.ramadajaco.com/

The information of this site is really important since it counts on specific details for interested in real estate. The illustration that offers on the life in Costa Rica and its people seems to me very advisable the image of the country and contributes great benefits for the tourism, business that offers many economic advantages for the country. The increase of real estate in Costa Rica during the last years is the test that Costa Rica in one of the destinies more looked for by the foreigners eager to invest in this point of exuberant beauty of flora and fauna. I also count on information referring to the subject.

Police in Copenhagen braced on Friday for a second day of riots as radical activists protested the eviction of squatters from an underground cultural centre, but the streets were calm at the start of the day. sportsbook Police officers were out en masse early on Friday, patrolling the troubled neighbourhoods of Noerrebro and Christianshavn where 217 people were arrested on Thursday after the activists clashed with police.
http://www.enterbet.com