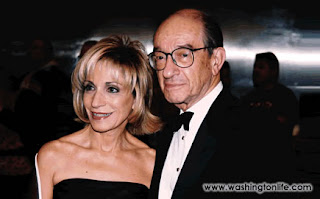 The Commerce Department reported Thursday that personal incomes rose by 1 per cent in January while consumer spending was up by 0.5 per cent. The income advance was the largest since a 1.3 per cent jump in January, 2006, and both the income and spending gains were bigger than had been expected.

I BLAME BUSH. SO... WHY ARE MARKETS SO JITTERY!? IT'S THAT BLABBERMOUTH GREENSPAN'S FAULT - SAITH ME & KUDLOW:

Or is Greenspan promoting his book due out in September? Maybe he's trying to match Bill Clinton's $40 million in speaking fees? Perhaps he's playing the Jimmy Carter game, where the former peanut farmer tirelessly attacks Republican President George W. Bush, and who before that, constantly criticized Papa Bush and Ronald Reagan?

All this stuff from Greenspan, Clinton, and Carter is a new low in bad manners. It is totally unseemly.