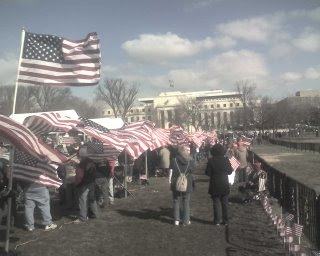 You would never know it in the media but Conservatives mounted a huge counter display to the anti-war protest today in D.C.

Several fellow blogger friends of mine were there and said that the Eagles outnumbered the anti-war protesters or were at least as big as the other side.


C-span covered the vitriolic left but not the Eagles. 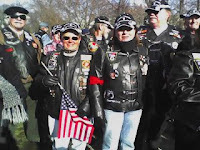 The Eagles had tons of American Flags flying and lots of bikers to counteract the hippies :-).

One article that I was able to dig up about the event was all about the anti-war protesters and these were the only 2 sentences about the Eagles group:

Vietnam war veterans wearing black leather jackets and their families gathered nearby for a counter-demonstration.

Some war supporters confronted the peace activists, tearing up and spitting on anti-war signs while chanting: "USA! USA!"

For more accounts of the event go here, here and here. So far Fox News is the only one reporting about how many counter-protesters there were.

Michelle Malkin posted on it since the Drive By Media is ignoring it.
Posted by Dionne at 4:40 PM

What we witnessed today was real America coming forward and saying ENOUGH!

Compare the mass produced signage and propaganda of the the anti-war/ hate Bush crowd to the original, genuine and spontaneous demonstration of Americans who joined the Gathering of Eagles.

If John Edwards is right and there are two Americas. Which one do you want to belong to?

Is this the first time that political demonstrators for the right have outnumbered the left?

We'll see how the media reports the numbers.

It's just a shame that C-Span choose to cover the anti-war event live, but reran some stuffy congressional hearing on the FCC during the time when the Eagles were giving speeches.

there are not 2 Americas.

there is America, and anti-America.

You folks represent the REAL America.

God Bless You All.

And shame on C-SPAN.