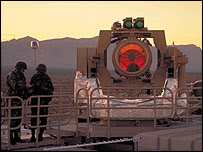 A laser developed for military use is a few steps away from hitting a power threshold thought necessary to turn it into a battlefield weapon. The Solid State Heat Capacity Laser (SSHCL) has achieved 67 kilowatts (kW) of average power in the laboratory.

It could take only a further six to eight months to break the "magic" 100kW mark required for the battlefield, the project's chief scientist told the BBC. Potentially, lasers could destroy rockets, mortars or roadside bombs.

I WONDER IF IT WILL BE ABLE TO LANCE VOLCANOES, TOO?
Posted by Reliapundit at 7:57 AM