AN ANTI-SEMITIC AND RACIST COMIC BOOK IN KOREA

One Free Korea reports about the Simon Wiesenthal Center's research on a Judeophobic and racist comic book called "Monnara Iunnara". The North end of Korea may be where this kind of prejudice mainly stems from, but even the South end has problems with racism too. The blogmaster for OFK, who's familiar with some of the Wiesenthal staff, presents the press release rightfully slamming the abominable book right here:

We were shocked to recently learn that a book from your very successful series, Monnara lunnara by Professor Lee Won-Bak is replete with classic hateful and dangerous antisemitic caricatures and themes. For your information I am inclosing a few of the most notorious, for they echo Nazi canards like those found in Der Sturmer and the Protocols of the Elders of Zion by recycling various Jewish conspiracies like Jewish control of the media and money, Jews profiting from war, and even the alleged reason for the 9/11 attacks was that, “Jews use money and the media as weapons in America to do as they want.”

In addition, the author even alleges that the “Final obstacle to success” is a so-called “Wall of the Jews.”

Ms Park, we urge Gimm-Young Publishers to review for itself the slanders in this book that historically have led to antisemitism, violence, hatred and even genocide. We respectfully suggest that you take steps to replace the litany of hate and instead provide young Korean readers with the facts about the Jewish people and our religion and values.

Here's a page featuring a translation of the panels from the horrific book. I should hope that the publishers will have a respectable response, and that Korean society will have something to think about, and do their best to reshape their values and education so that crap like this can be prevented in the future.

The following blog, Reading Monnara, which keeps track of whatever turns up in the book, features more disturbing items from inside the book, and it's not just the Jewish race that's been targeted, but even white and black people too. If you've got the stomach for the following: 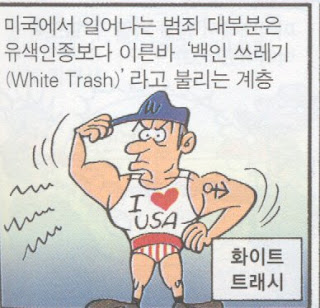 This shows that Korea, sadly, may not be all that different from what imperial Japan was like a century ago, and that considerable educational reform is needed there too.
Posted by Avi Green at 1:51 PM

John Samhain said...
This comment has been removed by a blog administrator.
8:49 AM