WILL PUTIN STEP DOWN? 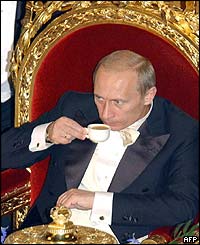 There seems to be a growing belief among those in the know in Russian politics that Putin will not step down when his term is over:

President Vladimir Putin will retain a leadership role in Russia even if he steps down in 2008, as required by the constitution, a senior politician has said. "He will not leave," Sergei Stepashin, head of Russia's accounting chamber, was quoted as saying in the Komsomolskaya Pravda daily Saturday. "I think he will find the kind of formula in which he would step down, but stay on."

Stepashin, a former prime minister, secret services chief and KGB veteran, suggested that Putin's post-Kremlin future could be modelled loosely on that of Chinese leader Deng Xiaoping, who in the 1990s was widely considered to retain backroom power despite his retirement.

Asked what sort of options Putin might consider, Stepashin answered: "Lots. Party leader, head of parliament, government, a new state council." Putin has repeatedly vowed to respect the constitution and leave office at the end of his second four-year term in 2008. However, he has also said that he hopes to retain influence.

According to Stepashin, Putin's departure would be a blow. "He is right and not right. There is a dilemma. From the political view, he should stay. Not only because the work is all going well. Any new leader brings a new team. At a minimum, this causes a break in momentum."

Putin, another KGB veteran whom critics accuse of rolling back democracy and crushing independent media, became president in 2000. Polls show that he is hugely popular in Russia.

In 2000, Vladimir Putin sat down with three journalists who interviewed him and used the transcripts verbatim to construct a biography of his life. Here are a few excerpts from that session:

Putin on his mission in life — “My historical mission,” he insisted, is to stop “the collapse of the USSR” (p. 139). To do this, he vowed to “consolidate the armed forces, the Interior Ministry, and the FSB [the successor to the KGB, the “secret police” of the Soviet Union]” (p. 140). “If I can help save Russia from collapse, then I’ll have something to be proud of” (p. 204).

On his rise from spy to president — “In the Kremlin, I have a different position. Nobody controls me here. I control everybody else” (p. 131).

On the czars — “[F]rom the very beginning, Russia was created as a supercentralized state. That’s practically laid down in its genetic code, its traditions, and the mentality of its people,” said Putin, adding: “In certain periods of time . . . in a certain place . . . under certain conditions . . . monarchy has played and continues to this day to play a positive role. . . . The monarch doesn’t have to worry about whether or not he will be elected, or about petty political interests, or about how to influence the electorate. He can think about the destiny of the people and not become distracted with trivialities” (p. 186).

I think Vlad has made it pretty clear what his intentions are.
Posted by Pastorius at 5:28 PM