WHEN WILL THE WEST PREEMPTIVELY ATTACK IRAN AND DESTROY ITS NUCLEAR ASSETS? 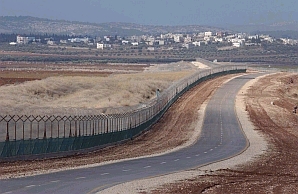 I have long argued that the OUTSIDE date for a preemptive attack against Iran's nuclear and military assets is December 2008 - after the next US presidential election and before the next inauguration.

I have felt for a long time that Bush would not leave this problem to the next president. And I felt for a long time that Sharon withdrew from Gaza IN PART in order to be able redeploy the IDF which had been stationed there, and to redploy them closer to major population centers and more strategic locations in order to withstand a likely pan-Arabic counter-attack after the preemptive attack. (I feel that the recent Hizballah War served this end too: wiping out or at least greatly reducing Hizballah's stockpiles - and the stocks of Hizballah's suppliers - in anticipation of the next round with Iran.)

Here's an item which reinforces my conclusion - from the JPOST:

Construction of the West Bank security barrier will be completed by the end of 2008, a senior defense official involved in the project told The Jerusalem Post on Wednesday.

Just in time. Just about when the West will have to make a move. The West, meaning either the USA or Israel, or NATO or all of the above. If it's the USA, then Israel might be the only nation in the world to get a heads up. (I would've included the UK if Blair had managed to stay on, but he'll be gone by then, and on the GWOT his replacement - Gordon Brown - is an unknown quantity.)

The only thing which can prevent this preemptive attack from happening is a democratic revolution in Iran. And there is no sure sign that this will happen in time - though it might if student protests can gather a lot more momentum. Sadly, Iran - like China - is enough of a police state to really make this REALLY difficult. Remember Tiananmen? It failed - in part because of surrender-monkeys like James A. Baker - who was Secretary of State at the time. (He also left Saddam in power, too - and also abandoned the Shias in 1991. He was a disaster then, and his ISG Report would be disaster for us now, too.)

BOTTOM-LINE: The withdrawal from Gaza and the fence were not two isolated decisions, each made in a vacuum; they're part of a coordinated effort to strengthen Israel's defenses in advance of a MAJOR war between Israel and her neighbors - the likes of which we haven't seen in a long time. I feel that this war will likely start in the aftermath of the West's preemptive strike against Iran, and that this will not be later than 12/31/06.
Posted by Reliapundit at 8:53 PM

First of all: I do not undertand why Pres. Bush asked Baker to lead this study group. The results: more immoral, accomodating, 'realism' from athe penultimate dealmaker (let's not forget IranContra and the deals made with the mullahs in Iran before Reagan was elected).

I am not sure I agree with your read on the redeployment of Israel's forces. The arab response to a preemptive strike against Farsi/Shia Iran will not be unified. I doubt they will flood troops and armor over the border - and if they did they would be annihilated by the Israeli Air Force. The Iranian's would probably launch a bunch of missiles - so in that sense the recent battles against Hizb'allah make sense. That's also why a pre-emptive strike sooner than later is looming.

BOTTOM-LINE: The withdrawal from Gaza and the fence were not two isolated decisions, each made in a vacuum; they're part of a coordinated effort to strengthen Israel's defenses in advance of a MAJOR war between Israel and her neighbors - the likes of which we haven't seen in a long time. I feel that this war will likely start in the aftermath of the West's preemptive strike against Iran, and that this will not be later than 12/31/06. Er, I THINK YOU HAVE TRULY ENTERED THE REALM OF FANTASY.

peter: you have made an idiotic statement: i am not fantasizing; i have made a scenario - logically arguing my points, one at a time. so simply that even lefties could understand them.

if you disagree: fine. make a counter-argument. limiting ypour critique to name-calling is idiotic.

Sorry, but i'm afraid i just cannot take what you say seriously anymore.Hence the unnecessarily flippant tone creeps in occasionally. Why not read Tim Garton Ash of the Guardian. He seems to have encapsulated what i believe has occurred under the Bush Presidency pretty accurately.