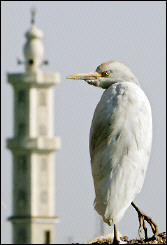 Egyptian health authorities reported that two more people were infected with the bird flu virus (H5N1). The two apparently contracted the disease after coming in contact with infected ducks. The number of infected Egyptians has now reached 17; seven of them have died from the disease.

Egypt -- the Arab world's most populous state -- is on a major route for migratory birds and has seen the third highest number of H5N1 cases after Indonesia and China according to Dr David Nabarro, the UN official charged with battling bird flu. The H5N1 strain of bird flu was first diagnosed in birds in Egypt in February, and the first case in humans was announced on March 18.

AND JUST BEFORE HAJJ - WHEN MILLIONS OF MUSLIMS, AND MANY TENS OF THOUSANDS OF EGYPTIANS - GO TO MECCA, AND SPREAD DISEASES. Were Bird Flu to be H2H now, it would spread like wildfire through the Muslim world.

HOW MANY MIGHT DIE? Well, health researchers have just completed new models for a regular old flu pandemic. THEY SAY MORE THAN 80 MILLION would die in the first year. Bird flu might kill even more.
Posted by Reliapundit at 9:08 PM