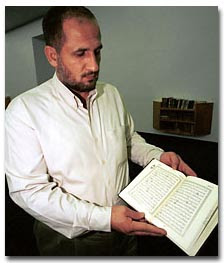 The Astute Bloggers were among the first in the blogosphere to describe the pre-flight activities of Omar Shahin and the other 5 Minnesota Imams as a deliberate attempt to wear down America West's anti-terror defenses:

By engaging in patterns of behavior which they evidently knew were considered by airlines and federal air marshals to indicate an imminent terrorist operation, the imams were inviting their removal from the flight. Their purpose in then claiming discrimination is to make it impossible, or at least much more difficult, for the airlines to remove Muslim passengers who do the things that terrorists are expected to do. In other words, the imams took an action calculated to make it more difficult for the airlines and the TSA to prevent another terrorist attack on American airliners.

Now Katherine Kersten reports in the Minneapolis Star-Tribune that an associate of Omar Shahin participated in a similar escapade way back in 1999:

Another incident of interest occurred during Shahin's tenure at ITC. On June 13, 2003, the FBI arrested Muhammad Al-Qudhai'een, who was active at the mosque, and transported him to Virginia to testify as a material witness before a federal grand jury investigating 9/11.

Earlier, the FBI had investigated Al-Qudhai'een's involvement in a 1999 incident. According to the 9/11 Commission Report, Al-Qudhai'een and Hamdan al Shalawi, a fellow Saudi, were removed from an America West flight after engaging in what the flight crew considered suspicious activity. The crew asserted that Al-Qudhai'een had twice attempted to open the plane's cockpit door. After 9/11, FBI agents in Phoenix considered whether the incident had been a "dry run" for the attacks. The 9/11 Commission noted that Al Shalawi had reportedly trained in Afghan terrorist camps in November 2000, learning how to conduct "Khobar Towers"-type bombing attacks.

The America West incident attracted national attention in 1999. In 2000, the two Saudis filed a lawsuit alleging racial discrimination by the airline. "What happened to us was based on racial and religious discrimination," al Shalawi told the Arizona Republic. CAIR hired the Saudis' attorney for them, and urged a boycott of the airline. America West won the lawsuit. Al-Qudhai'een was later deported to Saudi Arabia.

At this point, let me just add that deportation of the Minnesota Six would be entirely appropriate today.

UPDATE: Welcome RCP/FOX Buzztracker readers. NOTE: 12 hours later and LGF notes the story, too. Proving once again that if you want to most current links to the hottest news with the sharpest analysis and commentary, that TAB is the place to be!
Posted by Punditarian at 5:59 AM

Excellent find! I hat-tipped you HERE.