The United Nations is reporting that North Korea is in dire need of approximately 1,000,000 tons of food to fill the mouths of its starving people.
That's a billion kilograms - 2.2 billion pounds of food! That's half a pound of food per day, for 180 days, for 22,912,177 people!
You know what I think - not only do they need something to eat - they NEED A NEW REGIME!

Kim has a pot-belly; his people STARVE.
Reliapundit adds: How bad is the problem? In the past, North Koreans have been executed for stealing food. More on the current crisis HERE - from SoKo. EXCERPT: 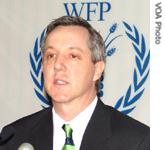 Meanwhile, observers say, for this only North Korean regime is to blame because of Pyongyang's restrictions on foreign relief work that led to the foreign food-aid cutbacks, and the indirect effects of international sanctions in response to its Oct. 9 nuclear test.

The U.S. cut donations to the World Food Program this year after North Korea ordered the WFP to slash the size of its mission in Pyongyang from nearly 50 people to 10 people and shut its five regional offices, from which inspectors tried to monitor distribution.

And South Korea suspended food aid on which the North depended to make up a shortfall of more than 1 million tons of rice, after the July missile tests. Nonetheless, South Korean relented when North Korea pleaded for help after severe flooding in August.

Kim would rather have nukes and starve his people, than have no nukes and people who have food. For this GENOCIDAL policy, he should be assassinated.
Posted by northern seer at 8:17 AM