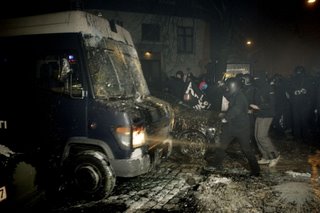 If you stick to the mass media you may hear about this tomorrow - but TAB thinks you might want to know today:

Approximately 300 rioters have been arrested after street battles with the Police in and around Norrebro. Danish media is referring to it as a war zone.

But wait a minute - it's not a battle with immigrant youths, a la the Paris Intifada. No - this time it is a skirmish between Law and Order and Left-wing anarchist holdovers from 1968 (more likely their children).

Background: The Youth House, was first occupied 29 October 1982 to be a place for teenagers to have for themselves, was sold by Copenhagen Commune to a private Christian group - Father House. The anarchists - Autonome - who spring from a violent anti-authoritarian movement called the BZ'ers - challenged the sale in court, lost, appealed and lost again.

The courts decided the house should be vacated 14 December - but the Mayor, and Police Chief said they would not do anything until after Christmas. The youth house staged protests - some less violent than others - and invited "activists" from Europe to come and support them.

Well, tonight they held a protest outside the building - and a few hundred had masks covering their faces/identities - which had been made illegal in Denmark a few years ago - which gave the police the grounds to act. Then the proverbial sh*t hit the fan. The results - including looting and vandalizing the neighborhood - are far more extensive than anticipated.

Copenhagen Commune did make a mistake by selling the house and not finding another locale for these troublemakers. Too bad they already had sold Saltholm to some Swedes. The trade unions - (whose offer of 13 million kroner - more than two million dollars - to buy the building for these kids was turned down by Father House) - could have supported such a move.

It is ironic that the Social Democrats, who control city hall, did not come up with a solution. The fact is the behaviour of these kids does not merit any public assistance - and they are no longer welcome. More HERE and HERE.

Reliapundit WELCOMES BLUE CRAB BOULEVARD READERS! Gaius at BCB makes a good point by emphasizing the link these rioters have with the 1968 mindset. What is it about the Left that makes them think it's still the late 1960s?! I think it's the fact that they feel that the years 1968-1974 (and Watergate) were their finest, and they want to re-live those years forever - and forget that the USSR fell, China became a free market, and that Reagan and Thatcher were right about socialism and taxes!
Posted by northern seer at 5:17 PM