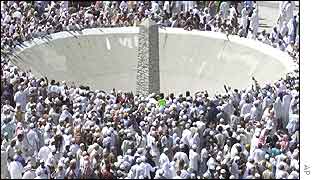 This year's Hajj takes place between December 29 and January 3, (next year).

Do you think the enemy will plan something big during that time? Or during Hanukah or Christmas? I dunno. Maybe. Maybe not. They ALWAYS want to whack us; during a holiday'd just be icing on the cake for these genocidal-maniacs!

In a perhaps unrelated matter... the Saudi Ambassador to the USA abruptly quit and went home this week. He used to run the Saudi CIA. Maybe he knows something's up? It seems odd to most observers that he left so abrubtly. Some guess that there's trouble back home in the ruling family. Maybe. Maybe not. Maybe the Saudi's are expecting a jihaditerror attack there - during hajj -- by the Iranians, or (al Qaeda) --- THE IRANIANS'VE DONE IT BEFORE! (Scroll down.)

Anyway, I hope the NSA is listening-in now, realll REALLY closely ... WHILE THE DEMS IN CONGRESS LET THEM! They just might discover something before it's too late!

ASIDE: Around 3,000 people have died in incidents on the hajj in the last 20 years. Previous disasters in recent years include:

244 pilgrims killed and a similar number injured at al-Jamarat

35 people killed in stampede at al-Jamarat

Fires driven by high winds tear through a sprawling, overcrowded tent city at Mina, trapping and killing more than 340 pilgrims and injuring 1,500

270 pilgrims, most of them Indonesian, killed at al-Jamarat

1,426 pilgrims, many of them Malaysians, Indonesian and Pakistanis, killed in stampede in overcrowded pedestrian tunnel leading to holy sites in Mecca in the worst hajj tragedy of modern times

This record of mayhem is pretty bad. It seems to me that the only time other religions have deadly pilgrimmages it's when there're Muslims involved. FACTS: here and here and here and here and so on... and of course who could forget the daily headlines from Iraq: Shias and Sunni MUSLIMS killing each other by the truckload! For those who follow the koran, killing and faith sure seem to go hand-in-hand.
Posted by Reliapundit at 8:45 PM