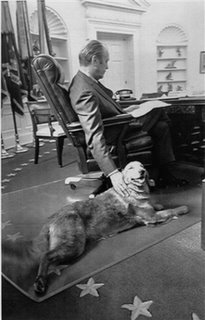 A friend of mine said the other day, "Funny how now that Ford has died, we're all heaping praise on him." Fair enough. Ford was not the best President in our history, not an innovator like FDR or Reagan and I certainly had disagreements with some of his views and actions, but now that he's gone, I've had time to genuinely reflect.

You know that show "Dirty Jobs" on the Discovery Channel? It's the one where host Mike Rowe spends a day working at some of the most dirty, miserable jobs in the country: Worm dung farmer; roadkill cleaner; chimney sweep; skull cleaner; etc. The slogan for the show is something like, "A salute to the people who make life easier for the rest of us." If you think about it, Gerald Ford had the ultimate "dirty job" at least in a metaphorical sense. Taking over the office of the Presidency in 1974 was the first dirty job of the era. You had a president resign in disgrace, we were leaving a brutal war with a sense of failure, Leftists with Viet Cong flags were marching in the streets, the economy was a mess, and the list goes on. Ford, who never aspired to the office, took over the reins of leadership with incredible grace and civility. He made decisions that were bad for his career, but good for the country. On July 4th, 1776, the Bicentennial, he saw the fruits of his leadership as the country celebrated 200 years with great joy and passion. He had done what needed to be done: he restored the faith in America.

It's true we tend to heap praise on the recently departed, but death tends to show us what we didn't appreciate enough when it was right there in front of us. President Ford's leadership was something that we desperately needed at the time and we live better lives today because of his willingness to do the "dirty work."
Posted by Jim Rose at 12:58 PM

Very nice and thoughtful posting, Popinjay. It is remarkable to think that the Bicentennial was celebrated with an unelected President in office, and the Republic didn't even blink. The strength of our Constitutional institutions is remarkable.