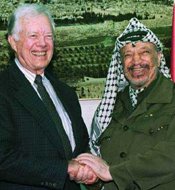 
More on Cleo Noel here, here, here, and here.
For over thirty years, the State Department and the White House covered up the evidence of Arafat's crimes in order to promote this KGB-trained Egyptian criminal as a statesman and a peacemaker.

Ion Mihai Pacepa, the former chief of Ceaucescu's foreign intelligence service, who worked with the KGB, describes Arafat this way: 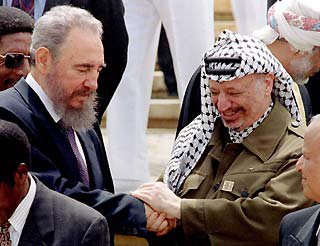 Gen. Sakharovsky asked us in Romanian intelligence to help the KGB bringing Arafat and some of his fedayeen fighters secretly to the Soviet Union via Romania, in order for them to be indoctrinated and trained. During that same year, the Soviets maneuvered to have Arafat named chairman of the Palestine Liberation Organizaiton, with public help from Egypt's ruler, Gamal Abdel Nasser.

When I first met Arafat, I was stunned by the ideological similarity between him and his KGB mentor. Arafat's broken record was that American "imperial Zionism" was the "rabid dog of the world," and there was only one way to deal with a rabid dog: "Kill it!" In the years when Gen. Sakharovsky was the chief Soviet intelligence adviser in Romania, he used to preach in his soft, melodious voice that "the bourgeoisie" was the "rabid dog of imperialism," adding that there was "just one way to deal with a rabid dog: Shoot it!" He was responsible for killing 50,000 Romanians. In 1972, the Kremlin established a "socialist division of labor" for supporting international terrorism. Romania's main clients in this new market were Libya and the PLO. A year later, a Romanian intelligence adviser assigned to the PLO headquarters in Beirut reported that Arafat and his KGB handlers were preparing a PLO commando team headed by Arafat's top deputy, Abu Jihad, to take American diplomats hostage in Khartoum, Sudan, and demand the release of Sirhan Sirhan, the Palestinian assassin of Robert Kennedy.

"St-stop th-them!" Romanian dictator Nicolae Ceausescu yelled in his nervous stutter, when I reported the news. He had turned as white as a sheet. Just six months earlier Arafat's liaison officer for Romania, Ali Hassan Salameh, had led the PLO commando team that took the Israeli athletes hostage at the Munich Olympic Games, and Ceausescu had become deathly afraid that his name might be implicated in that awful crime.

It was already too late to stop the Abu Jihad commandos. After a couple of hours we learned they had seized the participants at a diplomatic reception organized by the Saudi Embassy in Khartoum and were asking for Sirhan's release. On March 2, 1973, after President Nixon refused the terrorists' demand, the PLO commandos executed three of their hostages: American Ambassador Cleo A. Noel Jr., his deputy, George Curtis Moore, and Belgian charge d'affaires Guy Eid. In May 1973, during a private dinner with Ceausescu, Arafat excitedly bragged about his Khartoum operation. "Be careful," Ion Gheorghe Maurer, a Western-educated lawyer who had just retired as Romanian prime minister, told him. "No matter how high up you are, you can still be convicted for killing and stealing."

“Tovarishch Mohammed Abd al-Rahman Abd al-Raouf Arafat al-Qudwa al-Husseini, nom de guerre Abu Ammar,” was built into a Palestinian leader by the KGB in the aftermath of the 1967 Six-Day Arab-Israeli War. In that war humiliated two of the ’s most important allies in the Arab world of that time, and , and the Kremlin thought that Arafat could help repair the Soviet prestige. Arafat had begun his political career as leader of the Palestinian terrorist organization al-Fatah, whose fedayeen were being secretly trained in the . In 1969, the KGB managed to catapult him up as chairman of the PLO executive committee. Egyptian ruler Gamal Abdel Nasser, who was also a Soviet puppet, publicly proposed the appointment.

Soon after that, the KGB tasked Arafat to declare war on American “imperial-Zionism” during the first summit of the Black International, an organization that was also financed by the KGB. Arafat claimed to have coined the word “imperial-Zionism,” but in fact had invented this battle cry many years earlier, combining the traditionally Russian anti-Semitism with the new Marxist anti-Americanism. 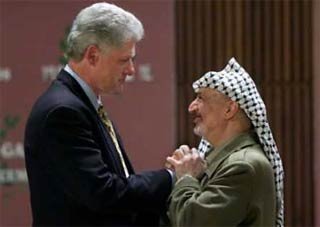 Arafat was not a Palestinian, he was a thief, a murderer, and a terrorist. And even though that the State Department knew for over 30 years that Arafat had ordered the murder of an American Ambassador, the appeasers and the Arabists who dominate the defeatist, anti-American and anti-free-market culture of that Department covered up for Arafat and promoted him as a statesman and a peacemaker.

The State Department was an accessory after the fact to the murder of their own career officer.

This must be one of the most shameful episodes in American diplomatic history. (Hat tip: Israel Matzav.)
Posted by Punditarian at 11:00 AM

John Kerry's father - Richard - was a life-time bureaucrat in the State Department, and a lifelong member of the "realist school", (who opposed Reagan and attacked Wilsonian foreign policy). Here's a quote:

"Americans," he writes, "are inclined to see the world and foreign affairs in black and white." They celebrate their own form of government and denigrate all others, making them guilty of what he calls "ethnocentric accommodation -- everyone ought to be like us."

As a result, America has committed the "fatal error" of "propagating democracy" and fallen prey to "the siren's song of promoting human rights," falsely assuming that our values and institutions are a good fit in the Third World.

And, just as Americans exaggerate their own goodness, they exaggerate their enemies' badness. The Soviet Union wasn't nearly as imperialistic as American politicians warned, Kerry argues. "Seeing the Soviet Union as the aggressor in every instance, and the U.S. as only reacting defensively, relieves an American observer from the need to see any parallel between our use of military power in distant parts of the world, and the Soviet use of military power outside the Soviet Union," he writes. He further claims that "Third world Marxist movements were autonomous national movements" -- outside Moscow's orbit. The book culminates in a plea for a hardheaded, realist foreign policy that removes any pretense of U.S. moral superiority.

Kerry and his father are the type of people who covered up for Arafat.