THE FRUITS OF APPEASEMENT - PART 3: THAILAND 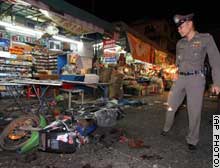 Thai authorities have canceled all major New Year's celebrations in Bangkok after at least seven explosions ripped through several areas of the capital, killing two people, police and hospital officials say. At least 12 other people were wounded in Sunday's attacks, which appeared to have been coordinated, and took place hours before New Year's Eve celebrations at midnight (noon ET). Major events in Thailand's second largest city, Chiang Mai, have also been canceled.

... Bombings occur on a regular basis in Thailand's three southernmost provinces of Yala, Narathiwat and Pattani, where an Islamic insurgency that flared in January 2004 has killed more than 1,900 people. But Ajirawit said the insurgents were probably not behind Sunday's attacks, AP reported.

This is the first time anything like this has taken place within Bangkok. The government had warned of an attack over the New Year holiday, but it was widely believed the warnings related to the troubled southern provinces of the country, where insurgent groups have waged an ongoing battle against the government for many years.

The latter news item seems to contradict the prior as it relates to the probable perps; IOW: IN VIEW OF THE EASRLIER PUBLIC WARNING, it is very LIKELY these were jihadist attacks.

IN A LARGER SENSE, IT MATTERS NOT WHICH TERRORIST GROUP "TAKES CREDIT" FOR THESE ATTACKS; THE FACT THAT THEY HAVE OCCURRED AT ALL IS A DIRECT RESULT OF THE FACT THAT THAILAND NOW HAS A REGIME WHICH HAS MADE IT CLEAR THEY WILL APPEASE ANYONE WHO THREATENS THEM. AND THIS POLICY OF APPEASEMENT OF COURSE ONLY INVITES MORE ATTACKS.

UNLESS AND UNTIL THE THAIS HAVE A GOVERNMENT COMMITTED TO COUNTER-ATTACK AND ENFORCE THE RULE OF LAW, TERRORISM WILL INCREASE.

Finally! A story about what's been happening in Thailand makes the msm!

The few previous stories about Thailand have emphasized that "Islamic insurgents" are confined to rural areas of southern Thailand. Of course, these "insurgents" have been spreading northward.

Today, the WaPo had something on its web page:

There was no immediate claim of responsibility for the bombings, which capped a year of unrest in Thailand, including a military coup three months ago and a mounting Muslim insurgency in its southernmost provinces.

National police chief Gen. Ajirawit Suphanaphesat confirmed six explosions on the iTV television network and said authorities were inspecting several more locations where there were suspicious packages. He said the insurgents were probably not behind Sunday's attacks, which injured at least 20 people....

Bombings and shootings occur almost daily in Thailand's three southernmost provinces of Yala, Narathiwat and Pattani, where an Islamic insurgency that flared in January 2004 has killed more than 1,900 people.

Muslims make up the majority in overwhelmingly Buddhist Thailand's deep south, where they have long complained of discrimination. The insurgents are not known to have launched any attacks in Bangkok....

When the government of Thailand falls, then the reality of the "Islamic insurgency" will be known, I suppose.