EVENTS TO WATCH THE NEXT FEW DAYS...

Three seemingly unrelated news items from the BBC show that things are really percolating now in the GWOT, on different fronts:
RUSSIA: Anti-Putin protest 'to go ahead' - 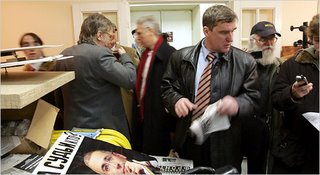 Garry Kasparov, one of the organisers of the protest ... vowed to go ahead with Saturday's protest march against President Vladimir Putin in Moscow, despite an official ban. The rally is being organised by former chess world champion Garry Kasparov, who has said its participants would try to avoid any possible provocations. The march is against what protesters describe as rampant corruption and a Kremlin crackdown on democracy.

ASIDE: TAB linked to an IHT story on the raid against Kasparov's HQ last week. Obviously ordered by Putin to intimidate Kaparov. Nobody else picked up on this story then, maybe they will now - or after the protest, (depending on how it turns out)? Stay tuned...

On Friday, voters will elect new local councils and a powerful clerical body known as the Assembly of Experts. Reformists are hoping for a comeback following comprehensive defeats by conservatives in recent years.

Maybe Ahmadinejad won't do well at the pollls? Maybe the recent student protests against him were good indicators of this? We'll see. Stay tuned...

EGYPT: Egypt cracks down on Brotherhood

Muslim Brotherhood member holds up Koran during protest in Cairo in September One of the top leaders of Egypt's opposition Islamist movement, the Muslim Brotherhood, has been detained. Police also rounded up about 10 other prominent members and dozens of students in dawn raids.

Egypt is losing patience with its own jihadists, and those of Hamas. Maybe Mubarak will become a better ally, now that Gaza is in a nearly full blown Civil War, and with the Iranian Shias and Lebanon's Hizballah Shias threatening the entire region.

We'll be watching how these events develop over the next few days. Maybe things wil turn our way? We'll see. Stay tuned...
Posted by Reliapundit at 12:12 AM

Nice connecting of the dots, reliapundit. I, for one, will be watching.

Cheers, and thanks for the quality linkage - Dinah

(P.S. Can't seem to pull up your consanguinity posts via the blog search function - the problem seems to be with beta blogger. Again. Will keep looking.)