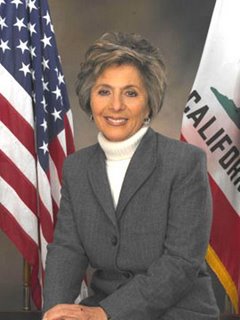 Last night, news came that Barbara Boxer rescinded an award to an Islamic activist because of his connections to CAIR.

Charles at Little Green Footballs brought out his "Flying Pig", and the usual seething and whining has already begun emanating from the dark corridors of the CAIR lair. Frequent Atlas Shrugs commenter X Dhimmi has decided it is time that all of us Infidels write to Boxer and thank her. I agree. Here is X Dhimmi's letter:

I am so heartened and pleased by your decision to rescind the "certificate of achievement" award issued by your office to Basim Elkarra because of his affiliation with CAIR. This makes an important, cautionary statement about CAIR which has been far too lacking among our national leaders.

To someone like me who follows closely the activities of CAIR and judges the organization as dangerous to America's freedoms, your courageous action is a breath of fresh air. You can be assured millions of Americans have been waiting for a national leader to speak up for America against this group which supports agendas inimical to American values and freedoms.

I have sent copies of this letter to the White House and my senators and representatives asking them to support you through the inevitable accusations of Islamophobia (indeed, the charge has already been leveled according to the Newsweek article) and attacks which I am certain you will endure. Remain strong and resolute, Senator! We truly need leaders with your integrity who refuse to succumb to the pressure from groups who wish to see America fail.

It would seem that Barbara Boxer is now, officially, an Ex-Dhimmi. Email form for contacting Senator Boxer.
Posted by Pastorius at 12:20 PM

Time for me to fire up the printer and send this lady a letter.

i agree this is a positive step for her, and she deserves to be conmgratulated.

but let's remember she is one of the worst socialistic doves in the senate.

she opposes EVERYTHING else we need to do to win - like the NSA, the patriot act, Bolton - conservative judges - etc.

she must continue to move toward the center on these issues for me to support her.

let's remember: jor lieberman is a liberal/leftie on social issues but a TRUE HAWK.

boxer may be opening her eyes on the widespread problems within the Muslim community but she is still a dove.

and to win the GWOT we must fight vigorously on all fronts: against the jiahdoist abroad, the jihadists and jihadist sympathizers at home. and the left.

she is still a dove leftie. to the left of kennedy and kerry and murtha. and therefore, she still has a long LONG way to go.

SURE: i'm rooting for her, as i am for all the other misguided/brainwashed dupes on the left.

they can all have their eyes opened.