WHAT'S IN A WSJ EDITORIAL TODAY, WAS HERE AT THE ASTUTE BLOGGER LAST YEAR! 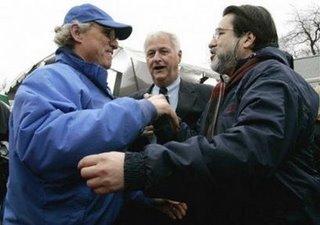 Venezuelan strongman Hugo Chávez is an ally of the Iranian mullahs, a supporter of North Korea, a close friend of Fidel Castro and a good customer for Vladimir Putin's weapon factories. Now he's also a business partner of Joseph P. Kennedy II. ...

Massachusetts Democrats seem especially eager to help. In a September 29, 2005, "confidential memorandum" addressed to "President Hugo Chávez" and uncovered by a Congressional committee, William Delahunt (D., Mass.) gushed that it was a "pleasure" to have met with the strongman "to discuss your generous offer." The Democrat advised Mr. Chávez to steer his oil through Mr. Kennedy's nonprofit and declared that "from a public relations perspective" the discount oil scheme "is an extraordinary opportunity to address urgent needs of people living in poverty, while showcasing the compassion of your nation."

[UPDATE: BUMPED UP] - This "BIRDS OF A FEATHER" routine might become a running series. Earlier in the week I posted about the Vonnegut/Kerry flock. Now it's CHAVEZ AND KENNEDY; WASHPOST:

There was a time when another Kennedy - a noble NEO-CON Kennedy known as president JFK - FOUGHT central American and Carribean dictators, just as Reagan would two decades later. Now the LEFT-WING REMNANTS of the once proud Kennedy clan is reduced to being PR tools of dangerous socialist tyrants. JFK AND RFK MUST BE SPINNING IN THEIR GRAVES!
This says something important about NOT ONLY the state of the Kennedy clan, but of the American Left they lead; it says they have jumped the shark. They equate the Sunni jihadoterrorists with our "Minutemen" and help tyrants get good PR. Shameless. What a pity. More HERE and HERE and (on a regular basis) HERE.

Pastorius, a regular commenter, earlier noted this: "Isn't it amazing that Leftists can't pull their head up out of the sand, once in awhile, and look around, and see who their friends are?" I agree: The Left should look around and see who they stand with: when it comes to withdrawing from Iraq they stand with ZARQAWI; one of their biggest HOLYWOOD supporters - Michael Moore, and another literary one - Kurt Vonnegut openly LAUD AND APPLAUD the jihadoterrorists; and now, their prized aristocracy - the Kennedy's - openly and unabashedly do PR for the hemisphere's most dangerous tyrant - Hugo Chavez. YUP: the Left should look around, and then look in the mirror!

THEN AGAIN, maybe I shouldn't be surprised; after all, this comes from the folks who fear AshKKKroft more than Binladen! Heh! UPDATE: MORE HERE. More HERE from the great ECONOPUNDIT.

This proves once again that T.A.B. is the place to be!

BTW: This post was the first of my "BIRDS OF A FEATHER" POSTS. Each post relates to a news event which reveals the convergence of Leftism and Jihadism. They now total about 31!
Posted by Reliapundit at 7:31 PM

Pastorius used to be a frequent commenter and now he is an infrequent contributor.

That was a comment. I guess I could make it a post, if you deem it worthy.

It's good to see that TAB is on top of stories which have significance. Still, fulfilling the role of Cassandra can be a downer. I know that role rather well.