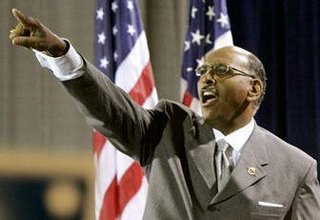 Dammit! I had this idea last night, but I didn't post it fast enough. Chris Cillizza beat me to it. The only race that really broke my heart last night was the Maryland Senate race. Michael Steele was such a good candidate and ran such a good campaign, it's an absolute waste that he's not going to the Senate. And you know what, I don't give a damn that he's a black Republican. I like him because he's an intelligent, charismatic man that makes me go "Hell yeah!" everytime I hear him speak on the issues. He's the kind of new blood the Republican Party desperately needs, and now that he's not going to the Senate, he's an excellent choice for RNC Chairman. Yes, he can help with outreach to the black community, but more importantly, he can breath some life into the party as a whole and show future candidates how a campaign is supposed to be run.

He was the right candidate in the wrong year, but that shouldn't mean his contribution should go to waste.

Steele is a breath of fresh air for the Republican Party. I'd love to see him as chairman of the RNC!

Totally agree with your assessment of Michael Steele! I really thought he had a chance to beat Cardin, but he just couldn't overcome the anti-Bush/GOP tidal wave in a very blue state. I think we'll see Mr. Steele on the national stage. RNC Chairmanship would be a good fit, but he may be in line as a VP on someone else's ticket.

Mr. Steele could not be RNC chair -- he engaged in dirty tricks in his campaign, using paid felons to distribute false fliers to black voters. The Republican Party had better be better than that