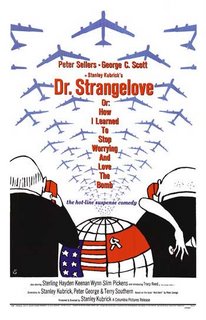 My title seems trite and silly to us, a generation of people who grew up hearing such platitudes as, "You can't hug children with nuclear arms." In light of the enormous destructive potential of even one nuclear warhead, my title seems to be trading in the obvious. Of course nuclear weapons have brought great evil into the world. After all, one nuclear bomb ruined Hiroshima's whole day - for decades. But, I am not merely saying nukes have brought evil into the world. I'm saying nuclear weapons allow evil to flourish, to grow larger, to have more impact.

Today, I heard military expert Max Boot, on the Dennis Prager radio show, make the very dubious claim that the atomic bomb has not had much impact on modern warfare. The evidence is very much to the contrary.

Nuclear weapons, because they allow for the strategy of Mutually Assured Destruction, have in the past ensured that the major powers, and those that generate the favored ideologies will never go up against each other directly. In the days of World War II, when Germany threatened England or Russia, when the ideologies of the various sides came to a head, those powers and ideologies went to war with each other.

This is an advantage to the world, because the stronger ideology, the one which provides the individual with the strongest raison d'etre, invariably wins. To put it simply, Communism and Democracy beat Nazism because Nazism was at most, a regional ideology, catering only to a very specific kind of fascism; white supremacism. Democracy and Communism, on the other hand, provided meaning on a universal level, which of course, left them the two standing powers in the aftermath of WWII.

The result was the Cold War; a war which lasted almost four decades. Sure, we managed to avoid direct armed conflict with the Soviet Union, and thus, the inevitable use of nuclear weapons. And yes, that is a good thing. Meanwhile though, great evil was allowed to flourish during those four decades, and it manifested in multiple genocides, wars, and the occupation and subjugation of Eastern Europe. Hundreds of millions of people had their lives squandered in the resulting psychological Holocaust which naturally flows from Communist dictatorship.

And, all this was because of the simple fact that the two powers found themselves incapable of squaring off against each other directly.

One of the major complaints about the execution of the Viet Nam war was that "we fought with one arm tied behind our back. This is another consequence of the military superiority which we have developed. To put it simply, we believe that it would be unfair to hit the enemy with anything near the full-force of our military capabilities. Once again, the result of this is that we allow great evil to flourish and grow. The Cambodian genocide most certainly was the result of our refusal to fight the Vietnam War with the full-force of our military.

Today, we are making the same mistake in the "War on Terror". In fact, I would contend that the very name "The War on Terror" stems from a refusal to confront our enemy, because of the potential resulting consequences. If we were to actually name the enemy in this war, then we would have to truly confront the apocalyptic ideology of the enemy, and we would recognize that we had to destroy them, no matter what. To truly recognize this enemy, Islamofascism, is to understand that there is no victory but by the complete obliteration or humiliation of every last person who subscribes to its ideology. There is no potential for compromise. There are no talking points for negotiation. There is no hope for growing a partnership.

This war will only be won when we have become so desperate that we will do anything.
Posted by Pastorius at 7:10 PM

even if MAD kept the ussr and the usa from squaring off, it cerainly won't do that for the jihadists who CANNOT be deterred.

the ussr only used proxies BECAUSE of MAD.

the iranians are using proxies UNTIL they get the bomb. them mad wonlt work.

which is why we must preempt.

sure: ultimateloy the human soul will win over evil.

but maybe the jihadists will defeat the West and keep us locked up in theri evil ideology for 1000 years.

let's do what we can to win now.