BIRDS OF A FEATHER - PART 25: ASSAD AND KIM JONG IL 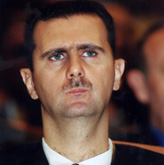 Pyongyang, November 15 (KCNA) -- General Secretary Kim Jong Il sent a message of greetings to Bashar Al-Assad, President of Syria and regional secretary of the Arab Socialist Baath Party, Wednesday on the occasion of the 36th anniversary of the corrective movement in Syria. The message said:

The corrective movement marked a historic event as it brought about a turning point in the efforts to achieve independent development and prosperity in Syria. Availing myself of this opportunity, I extend firm solidarity to the friendly Syrian government and people in their just struggle for protecting the sovereignty of the country and the dignity of the nation and achieving regional peace and stability, while resolutely standing against the ceaseless pressure and challenges of the hostile forces, and sincerely wish your people new progress and prosperity.

Two Leftist tyrants exchanging a hug. How sweet. Did Hugo and Jimmy and Nancy send greetings, too? They might as well. (I bet Pelosi thinks her appproaching ascension to Speaker will be a corrective movement, too. And - in the Assadian/Baathist sense - she wouldn't be wrong, either! Heh.)
Posted by Reliapundit at 10:19 PM