SARKOZY WILL FIGHT TURKEY'S ENTRY INTO THE EU 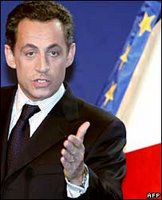 French presidential hopeful Nicolas Sarkozy said Turkey's entry into the European Union would "be the end of political Europe" and suggested it would worsen the "problem" of Muslim integration in the continent, in an interview to be published Thursday.

"It would be the end of political Europe" if Turkey joined the European bloc, Sarkozy, France's interior minister, told the magazine Le Meilleur des Mondes, calling instead for a "privileged partnership" with the EU's southeastern neighbour. ... "We have a problem of integration of Muslims which raises the issue of Islam in Europe. To say it is not a problem is to hide from reality. If you let 100 million Turkish Muslims come in, what will come of it?" the magazine quoted him as saying.

The minister, who heads the ruling right-wing UMP party and has declared he will run for president in next year's elections, also expressed concern that shifting Europe's border southeast would bring it closer to violent conflicts in the region.

"Turkey is in Asia Minor... I will not explain to little French school children that the frontiers of Europe are Iraq and Syria," Sarkozy said, naming two of Turkey's southeastern neighbours.

Bravo! Obviously, this man knows his geography, his history, AND his current events! BRAVO!

UPDATE: This NYTIMES article argues that Europe in general is BEGININNG TO WAKE UP:

Europe appears to be crossing an invisible line regarding its Muslim minorities: more people in the political mainstream are arguing that Islam cannot be reconciled with European values. ... centrists across Europe [are] angry at terror attacks in the name of religion on a continent that has largely abandoned it, and disturbed that any criticism of Islam or Muslim immigration provokes threats of violence.

For years those who raised their voices were mostly on the far right. Now those normally seen as moderates — ordinary people as well as politicians — are asking whether once unquestioned values of tolerance and multiculturalism should have limits. ...

With each incident, mainstream leaders are speaking more plainly. “Self-censorship does not help us against people who want to practice violence in the name of Islam,” Chancellor Angela Merkel of Germany said in criticizing the opera’s cancellation. “It makes no sense to retreat.”

Admitting you have a problem is the first step toward recovery. Now, they must fight back. And the fight must be sustained. Until victory.
Posted by Reliapundit at 9:39 PM