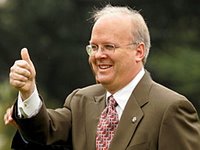 Rove predicts the Democats will fall short (complete round up here at TAILRANK). And here's how: More GOP voters will turn out and vote against the Dems, then Dems will turn out and vote for the Dems. HERE'S WHY: (1) The GOP GOTV effort is better. For too long the Dems have depended on "Organized" Labor to GOTV, and Labor ain't what it used to be; (2), most people HATE CONGRESS, but like their own representatives.l and (3), there's just a finite number of seats which CAN switch parties, and these low numbers do not favor the Dems.
Bottom-line: If the GOP gets out the vote, then the GOP wins. Heavy voting will be good for the GOP. Proof of this is LIKELY is the fact that voter turnout in primary contests this year - for both parties - were historically LOW; in fact the lowest ever. If Dems were "energized", then the turnout would've been higher. AND ANOTHER THING: Low gas prices and a high stock market - though good for the nation - are bad for the Democrats. Too bad: boo-freakin-hoo.
Posted by Reliapundit at 8:52 PM