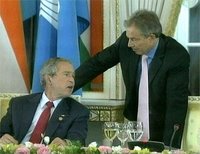 Last Wednesday Jonathan Freedland reported for the Guardian on Tony Blair's final speech to the Labour Party conference. According to Freedland the audience in Manchester weren't appreciative of the Labour leader's foreign policy positions on Afghanistan and Iraq and demonstrated it by failing to applaud him when he spoke:

... when Blair said that a withdrawal from Iraq or Afghanistan would be "a craven act of surrender", he said it to silence.

Yesterday the Guardian was forced to come clean:

In a Comment piece headed "A storming send-off - but the silences show why he had to go, page 29,"... we said that Tony Blair's statement that a withdrawal from Iraq or Afghanistan would be "a craven act of surrender" was received by conference delegates in silence.

That was not the case. As our "clapometer" recorded on page 6 of the same issue, the statement drew 11.44 seconds of applause.

Sheesh. Caught in a huge freakin' lie. Now, VIA HARRY... YOU CAN LISTEN TO BLAIR AND THE APPLAUSE YOURSELF. 12 seconds of applause is NOT silence. Stating otherwise was a blatant lie, a calculated lie meant to smear Blair and the GWOT. ALLTHE LIES OF THE MSM ARE "ANTI-WAR" OR PRO-JIHADI. As Glenn pointed out long ago: "They are not anti-war; they're on the other side. [December 2003]"
They've just succeeded in forcing Blair from office (albeit delayed for a few face-saving months), and they're trying to get a Democrat Congress in power IN ORDER TO IMPEACH BUSH. And then, they will surrender to the enemy - like they did in 1975 when they abandoned South Vietnam. And as they abandoned the Shah in 1979. And as they they abandoned the Contras in 1982. They will abandon Iraq and Afghanistan and even Israel.

If this wasn't the case - if the MSM wasn't actively distorting the news and actually broadcasting "anti-war" PROPAGANDA , then how do you explain the fact that ALL the MSM bias, all the MSM fauxtography, and all their LIES ALWAYS ARE ANTI-WAR? There is no other sane explanation. They are a Fifth Column. And that's why I have been syaing for a while, "In order to defeat the enemy abroad we must first defeat the MSM at home." Sadly, many on the right (like DAILY PUNDIT and POLITBURO DIKTAT) are beginning to buckle under the MSM's RELENTLESS assault on the truth, their relentless assault on the GWOT. But we mustn't ever relent. We must never give in. Never, never, never, never, never.

ADDENDUM: The MSM lies all the time because the truth is not on their side. And their lies are BIG and they repeat them over and over. Many people still trust the MSM and fall victim to their propaganda, stuff like: the plastic turkey which wasn't; ot that Rove outted Plame - but he didn't; and the granddaddy of them all - "Bush stole Florida in 2000", and the updated version "Bush stole Ohio in 2004."

As Churchill once said, (paraphrasing): "A lie travels around the world five times before the truth gets its pants on."

We're here to help the truth get its pants on faster.
Posted by Reliapundit at 8:44 PM