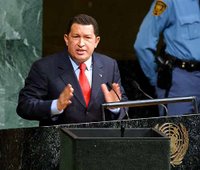 Guatemala, while continuing to lead Venezuela, failed to win enough support in the United Nations General Assembly to secure a Latin American seat on the Security Council after two days and 22 rounds of voting.

Needing 120 votes, or two-thirds of the 179 member governments that cast ballots, Guatemala received 102 votes and Venezuela got 77 in the General Assembly. Twelve of the UN's 192 countries abstained and one didn't vote in the final round today. "There is no way out as of now,'' Indian Ambassador Nirupam Sen said.

"It can only emerge after a few more rounds and we get really sick of it. There is some discussion on the margins of a compromise candidate.''

As long as Venezuela is kept off the Council, it's one for our side. Not that the U.N. is a good use of our time, but little victories over time...
Posted by Jim Rose at 7:42 PM