DANIEL ELLSBERG STILL HAS SOME JUICE 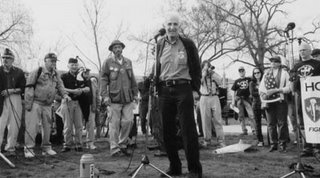 The man famous for leaking The Pentagon Papers has a piece in the October issue of Harpers in which he calls on government insiders to leak information on any war plans the U.S. government has for Iran. This call to arms from Ellsberg was "leaked" to Editor & Publisher a few weeks ago. Then just in the past week we get a leak from somewhere in the government of the National Intelligence Estimate which seemed to say that the Iraq War is hurting the War on Terror. Okay, it's not exactly what Ellsberg was calling for...he said Iran, not Iraq, but it's close enough. It may be a coincidence, or it may be that the Vietnam era traitor has some sway with the traitors of the modern era.
Posted by Jim Rose at 2:02 AM

fellow travellers and dupes to marixism then and to jihadism now. they thought reagan was a bigger threat than the USSR then, and they fear bush more than alQ now.