BUSH'S GOAL - TO TRANSFORM THE ARAB MIDDLE EAST - IS WORKING 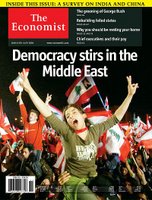 DAILY STAR (which is an Arab publication; via RCP):

[According to Zogby polling in several Arab nations]: An Arab middle class with global values was emerging, and Arab populations seemed to be moving toward greater identification with their individual countries, rather than primarily expressing wider pan-Arab or pan-Islamic sentiments. ... one reason for this change was "disappointment and disillusionment with the results of pan-Arab policies and attitudes, ...

I hope the polling data is accurate, and that we have the patience and resoluteness to see this transformation through to the end. (We mustn't bail out on this part of our strategy in the GWOT, nor should we bet the house on it, either.) Because it will take time, as in DECADES, like the Cold War. This struggle is at least as important, too: We need to liberate all our brothers and sisters everywhere from the archaic ideologies and vestigial tyrannies which prevent them from achieving their innate universal human rights. That's what "neocons" FDR and JFK believed; it's still just, right and true.

NOTE: Pastorius is growing more restless - with good reason; SEE THE NEXT POST. I'm arguing for more patience, but I am not arguing that we must rely solely on this part of our strategy. We can and should do more to foment more rapid change in the region:

Like demanding an end to all legal misogyny in the region, and an end to polygamy and endogamy.

These archaic inhumane practices are the foundational breeding ground for the enemy's capability for constant hostility and unspeakable cruelty to anyone they consider an infidel. When the most of the enemy's families are based on free choice, love, and respect for women, then they will raise children who love life as much as we do. And then, they will hate terror as much as we do, too.
Posted by Reliapundit at 10:55 AM

Let me be clear, the fact that I say there are no moderate Muslim organizations is not to say there is no possibility of change. It's up to regular human beings who are Muslim to make the change and redefine Islam in the eyes of the rest of the world.

But, it has to be done in deed, not words.

in this regard i think you are absolutely correct.

I tend to be about as pessimistic as Pastorius on the possibility of democracy in the Muslim world and the related question of the emergence of a "moderate" Islam. But, I don't see that our failure in the middle east Democracy-spreading project would be the end of the story. Maybe it will work, if so, great, and hopefully over time a moderate Islam will come about. But if not, that just means that the Umma will unify and harden, and the West will see this happening and itself harden and unify as happened in opposition to the spread of Islam in the middle ages. I think this hardening is necessary if we want to avert the real danger, which is that we slip quietly into dhimmitude, which essentially means we come within the sphere of Islam. Big war is better than a quiet descent into dhimmitude. I see everything that's happening now as a prelude, where everyone is sort of picking sides: a "shaking out" process. After all, look what happens when Muslim countries do get to vote: they vote for Hamas. A Hamasistan is not on the side of civilization, even if they were democratically elected. But democracy is good for that reason alone: it clearly shows where people stand, which side they have chosen. Sorry about the long comment.

the NEW miss world - a czech lie vaclav havel - is on my side: "She likes tennis and horse riding and her personal motto is "Always be an optimist."

seriously: your hamas pint is not entirely accurate: hamas won, but since they are an armed terrorist gropuop which intimdates voters/voting the lkection is not really valid/accurate.

hamas should NOT have been allowen on the abblot, not anymore than the IRA be allowed on a ballot in Irelandm, or ETA allowed tro run in Spain.

allowing them on the ballot was a HUGE error on the opart of Bush/Rice and SHARON.

i agree that clarityy is good, and that people must reap what they sow.
and i am glad that the worlsd has largely rejected the palistanis since they voted for hamas.
this clarity aided israel - in this sense it was wise of sharon.

but my BIG POINT is this: democratization cannot tolerate the intolerant.

just as we wouldn;t allow the KKK to run candidates the USA jihadoterrorists shjoudl NOT beb allowed to run either.

moqi alSadr's party should have been banned, too.

anyhow, my larger point is that democratoization is just ONE of SEVERAL stratgies/tactics, which does include WAR and should include DE-MISOGYNIZATION.

and: the West should shun nations which tolerate jihadoterror and misogyny - democratic or not.

democratzation is good in and of itself. democracy is the only way a government can be formed through mutal consent of the sovereign - for the PEOPLE are sovereign. a govt derives it's power from the people.

all people everywhere deserve to live under a system of mutual consent - it is a basic human right.

in conclusion: democacy is a fundamental human right. it must be supported for all people everywhere. it is NOT a panacea; it is part of a wide-ranging strategy to bring the tyrannized peoples of the world their universal human rights. democracy demands tolerance of the mioneoryt inorder to succeed. as democracie mature they learn this.

and the emerging democracies in afghanistan abd iraq will learn this, just as the eastern weuropean nations are learning this.