The American Spirit Vs. The Jihadi Spirit 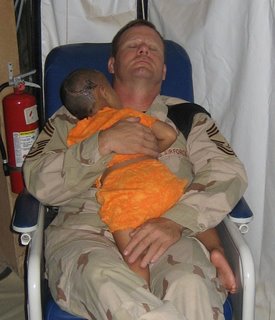 They shoot little girls in the head and leave them to die. American soldiers give them medical care, and try to help them sleep by holding them through the night.
A picture is worth a thousand words, indeed:

"Got a tough, but heartwarming story and a picture of John Gebhardt in Iraq. For those that did not know John, he was our former Med Group Chief.

Anyway, his wife talked with mine last evening and sent this picture. Mindy related that this little girl’s entire family was executed…they intended to execute her also and shot her in the head…but they failed to kill her.

She was cared for by John’s hospital and healing up, but has been crying and moaning. The nurses said John is the only one she seems to calm down with, so John has spent the last four nights holding her while they both sleep in that chair. "

You will never hear of the American Armed Forces following a policy of rounding up families and executing them for following the wrong ideology. It doesn't happen, and it will never happen.

But, if you read the news, you will see that Islamofascist Jihadis do this on a daily basis, killing men, women and children, as a policy, for failing to adhere strongly enough to their Islamofascist ideology.

That's "The American Spirit vs The Jihadi Spirit" in a nutshell.
Posted by Pastorius at 9:55 PM

BTW: why don't the liberals get this!?

part of me thinks it the fault of the SCOTUS which should not have intervened in the 2000 race.
they undermined Bush's credibility. If they had just ordewred a full statewide recount Bush woiuld have won, and retained credibility.

They argued they were acting to save the credibility of thj\e next POTUS, but they may had the exact opposite effect: they may have been the initial germ which started the entire BDS contagion...

And as you and I have discussed many times, completely eradicating the creed which fuels this jihadist policy is a pre-conditon for ending the GWOT.

This will likely require more wars, and more nation-building and spreading more democracy, but it will also require eventually ending for all time all of the misogynistic practices which are the foundational breeding ground for the enemy's capability for constant hostility and unspeakable cruelty to anyone they consider an infidel. To achieve this, the international community should demand that polygamy, forced marriage and endogamy be made universally illegal. When the enemy's families are based on free choice, love, and respect for women, then they will raise children who love life as much as we do. And then, they will hate terror as much as we do, too.