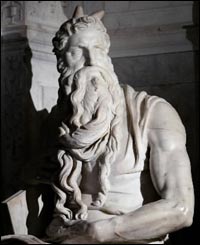 The sculpture sits in church of San Pietro in Vincoli on the Esquiline in Rome.

Though it falsely depicts the Jews' greatest prophet (who God spoke with DIRECTLY) as having horns, (a mistake by the artist based on a mistranslation of the Hebrew word for "rays of light" coming from the head of Moses), and though this false depiction may have contributed to the long-held racist myth once believed by many Gentiles that Jews had horns and were satanic, this sculpture has never ever been the object of organized scorn by Jews, nor has it ever been defaced. Jews have never ever even demanded it be altered or taken off of display.

Perhaps Jews were content knowing that this glaring mistake (on this otherwise beautiful sculpture) merely exposes the ignorance of many people regarding the Bible. We see it as a TEACHING moment, as they say.

What is it about so many Muslims that makes them react with violence all the time? I believe it is partly a result of the vehement misogyny, and the polygamy and endogamy which are practiced by Muslims - especially in Arab Muslim nations. After all, if someone is raised to believe that it's okay to murder one's daughter or sister or female cousin in order to restore "honor" to the family, (and that "rape-as-punshment" is okay), then one can certainly do all manner of evil to infidels. Even for disrespectful CARTOONS!

Tehran, Iran, Jan. 07 â€“ An Iranian court has sentenced a teenage rape victim to death by hanging after she weepingly confessed that she had unintentionally killed a man who had tried to rape both her and her niece.

This sickness should NOT be tolerated by THE FREE WORLD. We ended slavery; we MUST end these awful practices against women. Religion is no excuse for - nor can fanatical belief in any religion justify - slavery or murder or rape. [BTW: The Leftie-dove group AMNESTY INTERNATIONAL/USA is also calling attention to the horrific injustice of this rape victim being sentenced to death. Hat tip NRO.]
Posted by Reliapundit at 2:24 PM