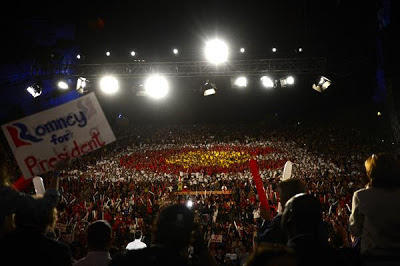 Roughly 10,000 people packed into the concert venue west of Denver, with thousands more turned away at the door. Traffic leading into Red Rocks gridlocked in the hours before the event. The lines to go through security and enter the venue wound through the parking lots.

It was the Romney campaign's biggest rally in Colorado by far, and the campaign pulled out the stops for it.

Supporters in the audience clacked together Thundersticks, creating a sound akin to a stampede. Musicians Kid Rock and Rodney Atkins warmed up the crowd. Colorado Rockies legend Todd Helton showed up to give his endorsement. And New Mexico Gov. Susana Martinez, a rising star in the Republican Party, also was on the bill, telling the crowd: "There's a guy backstage who has the answers to the problems we face."

When that guy walked out on stage — and the crowd roared a deafening roar — he appeared in awe of the scene before him.
"What a place this is," he proclaimed. He then paused, and the cheers of the crowd cascaded forward.

It was a long way from his days during the Republican primary, when even supporters openly wondered whether Romney's own party would ever embrace him. On Tuesday night, they cheered him like family.

"I think even the Republicans in the state have underestimated support for Romney," supporter Terri Miller said.

GREAT VIDEO OF THE PEOPLE ARRIVING:


(FULL 2 HOUR RALLY VIDEO HERE. SKIP AHEAD TO 1HR 22 MIN TO SEE THE SPEECHES! OR DON'T SKI AND LISTEN TO KID ROCK AND OTHERS!)

I can't imagine that BHO remains unaware of the Romney surge.