OBAMA HAS APOLOGIZED TO OUR ENEMIES FOR AMERICA, BUT WON'T APOLOGIZE TO ROMNEY FOR HIS LIES ABOUT BAIN

OBAMA HAS APOLOGIZED TO OUR ENEMIES FOR AMERICA, BUT WON'T APOLOGIZE TO ROMNEY FOR HIS LIES ABOUT BAIN.


Mr. Obama told the French (the French!) that America "has shown arrogance and been dismissive, even derisive" toward Europe. In Prague, he said America has "a moral responsibility to act" on arms control because only the U.S. had "used a nuclear weapon." In London, he said that decisions about the world financial system were no longer made by "just Roosevelt and Churchill sitting in a room with a brandy"

... And in Latin America, he said the U.S. had not "pursued and sustained engagement with our neighbors" because we "failed to see that our own progress is tied directly to progress throughout the Americas."

... Mr. Obama was asked in Europe if he believes in American exceptionalism. He said he did -- in the same way that "the Brits believe in British exceptionalism and the Greeks in Greek exceptionalism." That's another way of saying, "No."

BUT REGARDING THE SLANDEROUS LIES HE AND HIS AIDES HAVE TOLD ABOUT ROMNEY? HERE:

Obama said the questions raised in numerous media reports and highlighted by his own campaign aides were a legitimate part of the race for the White House.

"Ultimately, I think, Mr. Romney is going to have to answer those questions because if he aspires to being president, one of the things you learn is you're ultimately responsible for the conduct of your operations," Obama said in an interview with WJLA-TV in Virginia.


REPEAT: "... responsible for the conduct of your operations," Obama said..."

QUESTION FOR OBAMA: HOW ABOUT TAKING RESPONSIBILITY FOR FAST & FURIOUS AND SOLYNDRA?

WHAT A HYPOCRITICAL, LYING SACK OF LEFTIST SH*T. 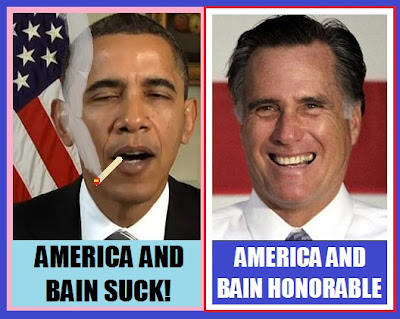 OBAMA'S FALSE ATTACKS AGAINST ROMNEY AND HIS ANTI-AMERICAN APOLOGIES TELL YOU EVERYTHING YOU NEED TO KNOW ABOUT OBAMA.


Bekenstein has been a managing director of Bain Capital since 1986. In 2008, he signed Barack Obama a $4,600 check. In 2004, he gave a $50,000 donation to the Democratic National Committee. That’s outsourcing money, plain and simple. And Obama was happy to take it.

If Romney really wanted a juicy example of outsourcing, he would have to look no further than the president's jobs council.
Obama's Council on Jobs and Competitiveness, 26 business leaders assembled by the president for job-spurring ideas, includes representatives of several companies that have used outsourcing, fueling job creation abroad and job losses in the U.S. Shipping work to low-cost overseas labor markets has been a trend in American manufacturing for decades.

... There’s General Electric, whose CEO Jeffrey Immelt has served as chair of the advisory board since January 2011. Since Immelt took over GE in 2001, the company has lost 37,000 American jobs, and added 25,000 jobs overseas.

... Several other corporations represented on the jobs council also rely on outsourcing. Xerox, for example, has a business model that depends on providing its outsourcing services to other companies worldwide. In its most recent annual report, Xerox said it is the “largest worldwide diversified business process outsourcing company in the large and growing BPO market.”


American Express, one of the pioneers of outsourcing call centers to India in the 1980s, still depends on “outsourcing functions … [and] relocating certain functions to lower-cost overseas locations,” according to its most recent SEC filings.

Even jobs council representative Permac Industries, a 36-employee precision part manufacturer located in suburban Minneapolis, is finding its place in the global supply chain. The company offers “outsourcing management, a process where Permac teams up with other global suppliers -- inside the U.S. as well as offshore -- to get the job done,” the company’s website says.


OBAMA IS A HYPOCRITICAL LYING BAG OF SHINOLA.

Posted by Reliapundit at 9:01 AM