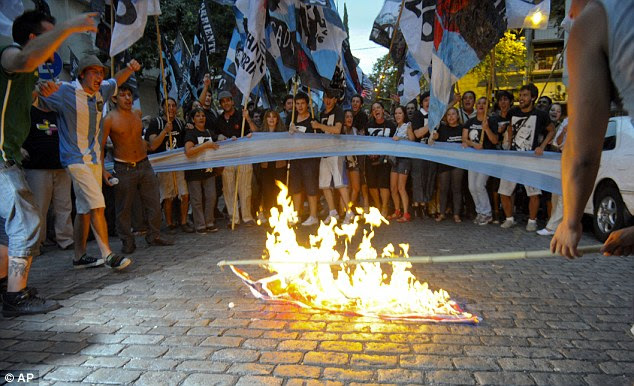 Mob: Hoards of protestors wraped in Argentine flags and football shorts chant as they watch the Union Jack burn on the streets of Buenos Aires yesterday
Quebracho leader Fernando Esteche, (who is leader of an anti-Israel, anti-semitic, pro- islamist group: http://www.dailymotion.com/video/xj39c9_argentine-political-leader-on-trial-over-jewish-attack_news?fbc=335)who was jailed on charges stemming from political violence during a march four years ago, pledged to target a British-owned business in Argentina every week. 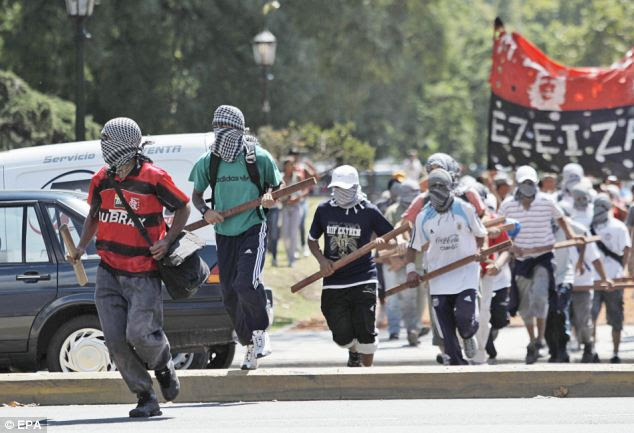 Urging a damaging British business boycott and attacking Prince William, he added: 'We call on the Argentine people to boycott all British firms and the products they sell in our country in a protest at the presence of the pirate prince.'

Fellow militant Federico Lopardo predicted the next protest could attract as many as 500 supporters.

He raged: 'Britain's imperialist policies have to be eradicated.

'This move to put the Falklands at the forefront of their foreign policy is an attempt to distract public attention from the economic and political crisis Britain is suffering.'

The Duke of Cambridge's arrival, ahead of a tour of duty as an RAF search and rescue pilot, comes as the Royal Navy prepares to send one of its most advanced new warships to the area.

His arrival has already led to controversy in Argentina which claims the prince will be wearing the uniform of a 'conqueror' when he deploys.
The Argentinean government said William's deployment was a distraction from Britain's 'internal problems'.

Vice-president Amado Boudou told the country's La Red (...) radio station that the move was a case of 'bravado' to mask high unemployment and the prospect of Scottish independence.(???)

(On the Argentine economy, the boot appears to be on the other foot:  The greatest threats to Argentina's economy in 2012 are: 1) any marked deterioration in the international environment, especially one that impacts Argentina's terms of trade; 2) worse than expected slowdown in Brazil; 3) growing tension between organized labor and the administration; 4) inflation that continues to run at above 20 percent per year; 5) issues pertaining to the foreign exchange market and growing concern that the peso needs to depreciate at a faster clip to restore competitiveness...


Argentina has lost competitiveness in recent years basically because of soaring labor costs that were not offset by increases in labor productivity (for example, unit labor costs in manufacturing are today higher than in the 1990s.  From: http://www.latinbusinesschronicle.com/app/article.aspx?id=5384 ) 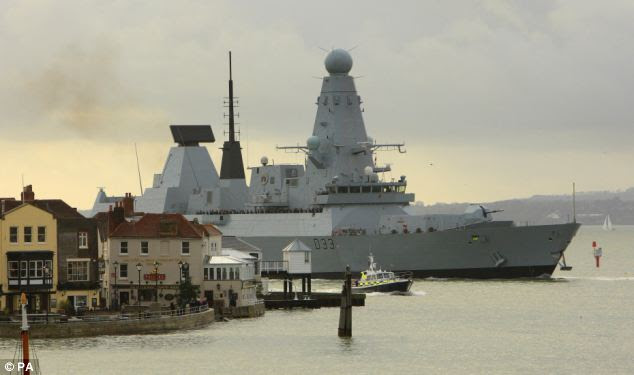 The Royal Navy's HMS Dauntless, which is being sent to the Falkland Islands.

MORE HERE.
Posted by Juniper in the Desert at 6:53 AM

Meanwhile Obama claims that Argentina has a legitime claim to the Falklands.
Who needs enemies with 'friends' like that.