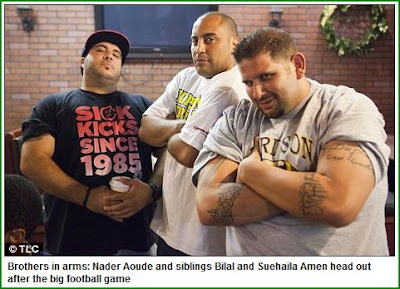 More pro-mozlem propaganda to shove down American's throats: if the government was a mother they would be in jail for child abuse!!
Mozlems are NOT like normal Americans, they follow the koran, which tells them not to befriend Christians and Jews and think it is just fine and dandy to have sex with six year old children. Would the man kissing his new son, be so gentle if that was a girl??


Families on reality television often seem anything but real – think Kardashians, Simmons or any 'real housewife.'
Yet the featured characters in the new All-American Muslim revel in their ordinariness. In fact, it's the whole point of the series: to demystify a community foreign to many fellow Americans.


Debuting this Sunday on TLC, All-American Muslim features five families from Dearborn, Mich., a city near Detroit with one of the highest concentrations of Arab descendants in the country. 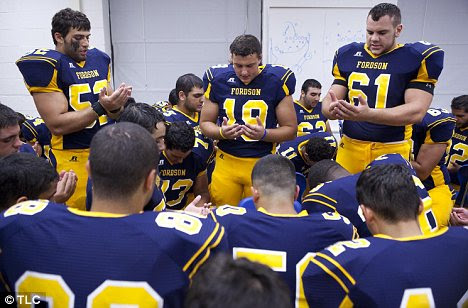 Before the big game: The new show focuses on Fordson High School, which is 95 per cent Muslim
All of the main characters were born and raised in the U.S., and their daily dramas are the stuff of scrapbooks everywhere: getting married, having a baby, opening a new business.
'People need to learn our stories,' said Nawal Aoude, a pediatric respiratory therapist. 'People need to learn who we are. The only time people see Muslims in the media, they are cast in a negative light.'

Aoude is pregnant in the first episode of the eight-episode series, which was filmed over the summer. Her husband, Nader, is depicted showing the support and carefully hidden exasperation that fathers-to-be everywhere can appreciate.

Posted by Juniper in the Desert at 3:38 PM