Why I support a 2011 budget compromise: THE HOOVER DAM

If you try to dam up a big fast stream at a particular spot by dumping a lot of big stones in the middle of the stream where the current is strongest, then you will fail because the current will just push the stones downstream until the land harmlessly on some bank way downstream.

To actually have a positive effect you need to dump fewer stones from the edge and gradually build it up.

The same is true of damming up a big river: you can't just dump a barrier in the middle of the flow: To build the Hoover Dam, the Colorado River had to be diverted first: 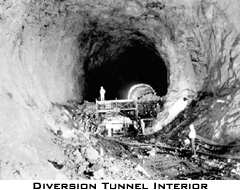 Before the dam could be built, the Colorado River needed to be diverted away from the construction site. To accomplish this, four diversion tunnels were driven through the canyon walls, two on the Nevada side and two on the Arizona side. These tunnels were 56 feet (17 m) in diameter.[45] Their combined length was nearly 16,000 ft or more than 3 mi (5 km).[46] The contract required these tunnels to be completed by October 1, 1933, with a $3,000 per day fine to be assessed for any delay. To meet the deadline, Six Companies had to complete work by early 1933, since only in late fall and winter was the water level in the river low enough to safely divert.[47]

Tunneling began at the lower portals of the Nevada tunnels in May 1931. Shortly afterward, work began on two similar tunnels in the Arizona canyon wall. In March 1932, work began on lining the tunnels with concrete. First the base, or invert, was poured. Gantry cranes, running on rails through the entire length of each tunnel were used to place the concrete. The sidewalls were poured next. Movable sections of steel forms were used for the sidewalls. Finally, using pneumatic guns, the overheads were filled in. The concrete lining is 3 ft (1 m) thick, reducing the finished tunnel diameter to 50 ft (15 m).[46] The river was diverted into the two Arizona tunnels (the Nevada tunnels were kept in reserve for high water) on November 13, 1932. 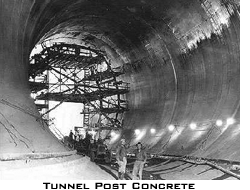 This was done by exploding a temporary cofferdam protecting the Arizona tunnels while at the same time dumping rubble into the river until its natural course was blocked.[48]

Following the completion of the dam, the entrances to the two outer diversion tunnels were sealed at the opening and half way through the tunnels with large concrete plugs. The downstream halves of the tunnels following the inner plugs are now the main bodies of the spillway tunnels.[46]

The same is true of damming up the federal budget. We can't balance it all at once. We need to divert it and gradually cut off the flow before building the dam.

We need to do it step by step.

So I won't condemn the GOP leadership in the House if they make a compromise on the 2011 federal budget.

A LONGER VIDEO ON THE CONSTRUCTION OF THE DAM - AT THE 5:50 MARK, THEY DESCRIBE THE TUNNEL CONSTRUCTION: