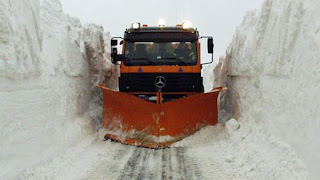 After being covered with approximately 160 centimeters of snow (that's more than 5 feet!), and snow drifts up to 5 meters (that's more than 15 feet!) authorities have declared Bornholm a disaster area and asked for aid from the mainland of Denmark.

December is proving to be the chilliest since 1981 - and is well on it's way to supplant December 1981 as the coldest December in Denmark since the Danish Weather Service began keeping records in the 1874.