YAHOO NEWS ON THE DIABOLICAL DESIGN OF THE GROUND ZERO VICTORY MOSQUE, "HOMAGE TO OTHER RELIGIONS"

You gotta be fucking kidding me? I thought for sure the media would simply ignore this story, or even more likely, deny it, and call those of us who brought it up paranoid and insane.

Instead, they are admitting it, and calling it a tribute?

How long, oh Lord, how long?

Developers release renderings of controversial Park51 community center | The Upshot Yahoo! News (Hat tip J.C. Barile)
The developer behind the controversial Park51 Islamic cultural center has released the first official renderings of what the 16-story building will look like when built. The Islamic Center will have a sleek, modern design, and will be covered in hexagonal shapes that resemble a honeycomb.
However, as has been the case throughout the controversy surrounding the project, critics are finding other messages in the design plans. Conservative blogger Pam Geller, a leading foe of the project, has denounced the honeycomb design as a representation of "crashing Stars of David," and described the design plan as "diabolically audacious."
Other, less polemically-minded critics have interpreted the conceptual plans as a statement on the project's broader interfaith message. Ed Pilkington, a writer for the UK Guardian, contends the structure's Star of David echo is one among several design elements crafted consciously in "homage to other religions"; the overall effect of the drawings, he argues, is to render Park51 "decidedly upbeat and galmorous [sic] building, more festive than threatening." Meanwhile, a Park51 spokesman said through Twitter that the hexagons aren't intended as any sort of reference to the Star of David, but rather come from an Arabic architecture technique called Mashrabiya.

Now the Jewish star is not a Jewish star? More Islamic falsifying of any other religions.
Here's the image of the interior: 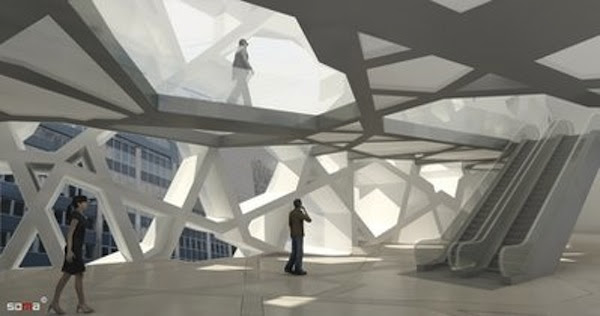 And here's another interior view of the project: 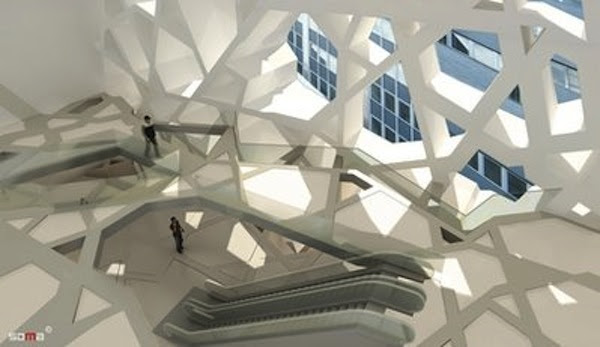 Pastorius comment: I also want to point something else out. The other day, a reader was challenging me, commenting, "But Pastorius, all Islamic art, other than calligraphy, is geometric in design."

Islamic art, according to Sharia law, may not be representational. Muslims may not draw pictures of human beings, birds, trees, mountains, or anything which is representative of any object in the real world.

So, almost by default, Islam has used geometric design as a platform and inspiration in its artwork.

Now, the problem with claiming that this Ground Zero Mosque design rests wholly within the tradition of the Islamic use of geometric form is this:

Islamic art is, in general, made of symmetrical geometric designs.

The Ground Zero Mosque design, on the other hand, is asymmetrical in nature. It is absolutely un-Islamic in it's aesthetic. It is purposefully Postmodern in style. It is chaotic by design, decadent, asymmetrical, anarchic and debauched in style.

Can anyone gaze at the design and see anything but calculated confusion?

The building looks like a building crumbling, because it is a tribute to two crumbling buildings.

And, of course, they threw in the Pentagons for good measure.

The Ground Zero Mosque design is a celebration of a culture in crisis. And, it is important to note, that when we speak of the design, we are speaking only of the facade. This building has a very noteworthy quirk as architecture. That is, it designed in such a way that it's facade is dominant. As it is, we see nothing of the structure underneath.


This is noteworthy, because it corresponds to the Imam Feisal Rauf's stated Mission to the United States. You see, The Imam Rauf's book was originally entitled "A Call To Prayer from the World Trade Center Rubble: Islamic Dawa in the Heart of America."

The facade of the building is meant to convey the same meaning as Rauf's book; Islam will rise out of the rubble of Western Culture. The facade will crumble away, and the reality of Islam will be left standing there for all to see.

This is the closest thing to a Trojan Horse gift the modern world has ever seen.

We would be fools to accept it.
Posted by Pastorius at 4:25 PM

I just added a paragraph about the facade being the dominant impression of the building.

Hi Guys.
I don't know it really bothers me that their architects don't even have their website up and running ,somehow i get the feeling this is just a front that they hold in front of our eyes ,something different will eventually be placed there.
Currently soma operates offices in Vienna and Salzburg, Austria.Nothing in the USA!!!