WHAT THE MALDIVES TELL US ABOUT THE ECO-NUTSIES

The Maldives is an archipelago of 1,190 islands in the Indian Ocean, with an average elevation of four feet. Even a slight rise in global sea levels, which many scientists predict will occur by the end of this century, could submerge most of the Maldives.

Last November, when Nasheed proposed moving all 300,000 Maldivians to safer territory, he named India, Sri Lanka and Australia as possible destinations and described a plan that would use tourism revenues from the present to establish a sovereign wealth fund with which he could buy a new country — or at least part of one — in the future. “We can do nothing to stop climate change on our own, and so we have to buy land elsewhere,” Nasheed said in November.

When the movie ended, Nasheed approached a microphone stand in front of a giant house palm. He has a jockey’s physique, and the fronds of the palm arched over his shoulder. His wonder-boy demeanor might seem naïve, but he spent almost 20 years opposing a dictator and enduring torture; few doubt his fortitude.

The audience in the ballroom listened closely when Nasheed declared that it was time to act. “What we need to do is nothing short of decarbonizing the entire global economy,” he said, his high voice cracking. “If man can walk on the moon, we can unite to defeat our common carbon enemy.” Nasheed didn’t use notes for his speech; aides say he never does.

“And so today,” he continued, “I announce that the Maldives will become the first carbon-neutral country in the world.” 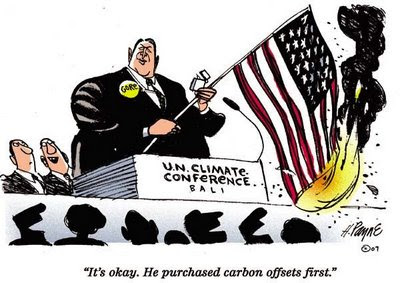 SEROUSLY, THIS CRAP IS INSANE.
CHANGE: WHY, IN POLITICS, DOES THE LEFT THINK IT'S GOOD, BUT IN NATURE IT'S BAD!?

ECO-MUTSIES ARE UNDER THE MISAPPREHENSION THAT NATURE IS STATIC AND PRISTINE AND WOULD REMAIN SO WERE IT NOT FOR MAN.
DISSENT ACCORDINGLY.
Posted by Reliapundit at 11:28 PM

man, you're fascinating. you know, we hear about the cliche a lot but rarely get a chance to meet the authentic individual; and now, here you are, epitomising a certain conception we have of the backward american. do you actually live in the midwest? how many times per week do you go to church? how many guns do you own? are you working in a farm?

IF YU HAD A BRAIN YOU'D SEE IN THE SIDEBAR I LIVE IN NYC.

YOU ARE A TYPICAL SHIT FOR BRAINS KNEEJERK LIB: ATTACKING ME AND NOT RESPONDING TO ANYHTING IN THE POST.

WAKE UP OR FUCK OFF.