The EPA's proposed endangerment finding made public today is attracted a lot of negative attention from, among others, members of Congress and leaders of the oil and natural gas industry. 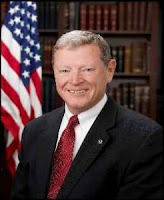 For instance, Sen. James Inhofe (R-Okla.) said today that the Environmental Protection Agency’s proposed endangerment finding will unleash a torrent of regulations that will destroy jobs, harm consumers, and extend the agency’s reach into every corner of American life. Despite enormous expense and hardship for the American economy, these regulations will have virtually no effect on climate change.

On behalf of the more than 400 companies in the oil and natural gas sector represented by the American Petroleum Institute, API President Jack Gerard issued a statement today in which he slammed the EPA's proposed endangerment finding.

To get started reading both statements, click here.
Posted by Bob McCarty Writes at 1:53 PM

American "energy" perps have been sucking government tit too long.

Energy should go the same way.